European Union leaders appear set to approve Jean-Claude Juncker as the European Commission's next president. The leaders of Ukraine, Georgia and Moldova are also to sign deals deepening their ties with the bloc. 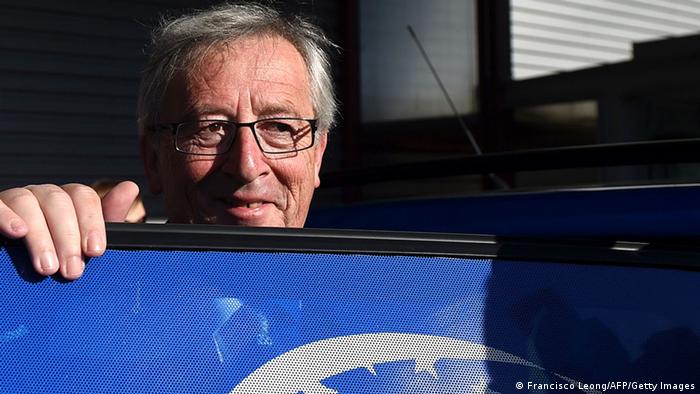 As the 28 leaders concluded their first of two days of talks on Thursday, the vast majority of them appeared to be supportive of Jean-Claude Juncker's candidacy to replace current European Commission President Jose Manuel Barroso.

However, British Prime Minister David Cameron again vowed to do everything in his power to prevent the longtime former Luxembourg premier from getting the job.

Cameron, who regards Juncker as an old-school European federalist incapable of the reforms he believes are needed, had threatened to put the matter to an unprecedented vote among the leaders.

The only other government head who had come down on his side of the issue is Hungarian Prime Minister Viktor Orban.

German Chancellor Angela Merkel on Thursday sought to defuse tensions between London and the most of the rest of the European Union.

"I think we can find compromises here and make a step towards Great Britain," she said shortly before the leaders gathered in the western Belgian town of Ypres to mark the 100th anniversary of the start of World War I.

"I repeatedly spoke of a European spirit which is needed and which will help us to find good solutions," she added.

The process of selecting a new European Commissioner is a complicated one, with both the European Parliament and the bloc's 28 leaders having a say in the matter.

Moving closer to the EU

Apart from seeking to reach a consensus on the next head of the European Commission, the leaders were set on Friday to witness the signatures of their counterparts from Ukraine, Georgia and Moldova on agreements to move the three eastern European countries closer to the EU.

Newly elected Ukrainian President Petro Poroshenko is to pen the free-trade clauses of a deal that was signed in March. The last minute refusal by former Ukrainian President Viktor Yanukovych to sign that deal late last year contributed to Ukraine's current crisis.

Jean-Claude Juncker's bid to become the European Commission's next president has been given a boost after two more EU countries said they would support his candidacy. This leaves the UK looking increasingly isolated. (26.06.2014)

Britain's Cameron to call for vote if Juncker's nomination pushed through

Britain's Prime Minister Cameron plans to call for a vote of EU leaders over Jean-Claude Juncker's nomination for the bloc's top job. The British leader wants a reformer and someone who was chosen by the bloc's members. (23.06.2014)

Leading Social Democrats have agreed to back conservative candidate Jean-Claude Juncker as the next president of the European Commission. It comes just days before EU leaders are to meet to try to decide the issue. (21.06.2014)