Ukraine's new president, Petro Poroshenko, has taken the oath of office in parliament in Kyiv. He faces the huge challenge of uniting a country teetering on the brink of civil war. 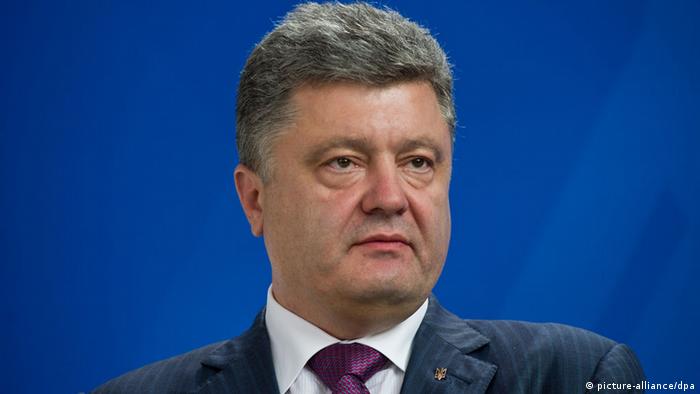 Petro Poroshenko was inaugurated on Saturday as the new president of Ukraine at a ceremony in the parliament in the capital, Kyiv.

Poroshenko was elected with 54.7 percent of the votes in a presidential election on May 25.

In his inaugural speech, Poroshenko pledged "to protect the sovereignty and independence of Ukraine" with "all my strength."

He also guaranteed people in the east of Ukraine the right to retain their Russian language, and to decentralize power to regions.

The ceremony was attended by several VIPs from abroad, including the presidents of Germany and Poland, Joachim Gauck and Bronislaw Komorowski. US Vice President Joeseph Biden and European Council President Herman Van Rompuy were also at the inauguration.

The 48-year-old Poroshenko succeeds Viktor Yanukovych, who was ousted as president in February after sometimes violent protests in Kyiv following his rejection of an EU Association Agreement in favor of closer ties with Moscow.

Poroshenko used his inaugural speech to announce that he intends to sign the economic part of the EU Association Agreement "very soon," adding that he saw this as the first step to full membership of the bloc.

A billionaire confectionery magnate, Poroshenko has become Ukraine's fifth president since independence and the first since 1991 to win election with more than half the vote in a single round.

He takes office as Ukrainian government forces remain pitted against pro-Russia separatists in the east of the country who have turned parts of the region into a war zone, occupying towns and declaring their own "republics."

The conflict has complicated relations with former Soviet master Russia, which opposes Kyiv's military drive against the insurgents.

On Friday, Poroshenko met on the sidelines of D-Day commemorations in France with Russian President Vladimir Putin, who said he welcomed Poroshenko's plans to stop the bloodshed, but called for a stop to what he called Kyiv's "punitive" military operation.

After the brief encounter, Poroshenko told Ukrainian television that it was "a good thing" that the two sides had talked, adding that a Russian representative would be traveling for further talks Sunday.

Putin was not invited to the inauguration ceremony, but Moscow was represented by Ambassador Mikhail Zurabov, who has been sent back to Kyiv after being recalled for "consultations" earlier this year.

Russia has rejected accusations by Kyiv and the West that it is actively supporting the rebels, though many of them have been revealed to have come from across the border.

Poroshenko will also face the problem of pulling Ukraine out of the recession that has plagued the country for the past two years.