A global Pew survey has shown a record number of people in nine of the world's top economies have a negative opinion of China. Pew said Beijing's response to the coronavirus pandemic has soured global public opinion. 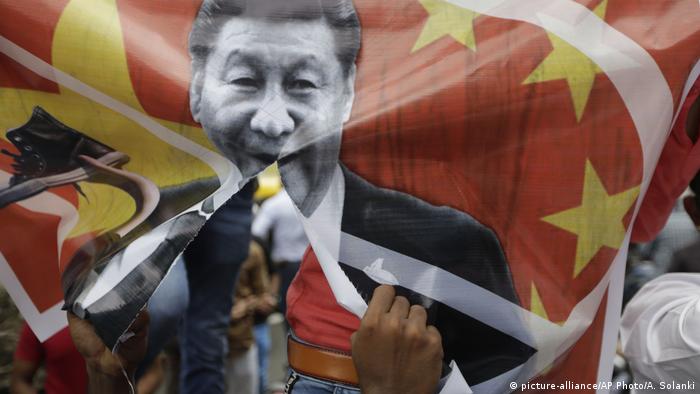 Negative public opinion toward China has significantly increased in several advanced economies, according to a new survey released by the Pew Research Center on Tuesday.

In nine of the 14 countries included in the survey, negative views on China have reached their highest point since Pew began collecting data on the topic more than a decade ago.

Negative public opinion toward China was also surveyed at its highest ever by Pew in Germany, the Netherlands, Sweden, South Korea, Spain and Canada.

The coronavirus pandemic exacerbated negative perception of China among the 14 advanced economies surveyed, as an average of 61% of respondents among all countries surveyed think China did a bad job combating the pandemic.

Only the US polled worse, with 84% of respondents saying the US has done a poor job with COVID-19.

"In 2020, we can see that people who think China did a bad job handling the COVID-19 pandemic also have overall unfavorable views of China, so we can definitely say that opinions about COVID-19 are related to negative views of China," Laura Silver, a senior researcher at Pew, told DW.

"In some of these countries, the perception of how China has handled coronavirus was not only based on how it dealt with the virus domestically, and the original outbreak and spread, but also health aid provided internationally," said Silver.

Not much confidence in Xi Jinping

The report also showed that China's leadership has become more unpopular in the countries surveyed by the Washington-based research center.

An average of 78% of respondents have little to no confidence in Xi Jinping to do the right thing regarding world affairs.

Data shows the lack of confidence in Xi is at a historic high in every county with available data.

"In most countries, the percentage saying they have not too much or no confidence in him has grown by double digits since last year," the report showed.

However, while global confidence in Xi has dropped tremendously, a higher percentage of people still have more faith in him than US President Donald Trump.

"When it comes to leaders of [China and the US] both Trump and Xi inspire little confidence among adults in other countries," Silver said.

However, the decreasing level of confidence in Xi doesn't affect how most countries in the survey assess China's economic power.

People in most countries surveyed, especially in Europe, see China as the world's top economy. Only in the US, South Korea and Japan do more people consider the US as the leading economic power.

Silver said that China has been viewed as the top economy in the world over the last decade among European countries, according to survey results from France, Germany, Spain, the UK and Poland.

"There has been a general decline in the percentage naming the US as the top economy," Silver said. "It started around the Great Recession, but there have been some moderate ups and downs since then."

Nevertheless, positive perceptions of China's growing economic power doesn't translate to an overall rosy opinion of the country and its government.

"China’s efforts to influence public opinion in the West are certainly not the only types of information people are likely to see or rely upon when it comes to forming opinions about China," said Silver.

"Opinion of China is likely to be multifaceted and influenced by myriad factors," she added.

China's Xi: World must not 'politicize' fight against COVID-19

Will China's regulator reshuffle turn all state media into propaganda?

Beijing has announced a plan to consolidate film, news and publishing under one regulatory body. With control over all media content, China's Communist Party can project its ideal image and quash dissent.

As Chinese global influence to continues to grow, Beijing-sponsored media content is increasingly appearing in US and German news outlets. Experts warn China is instrumentalizing the Western press to promote its image.