Undocumented Filipino migrants in the US anxious as deportation looms | Asia| An in-depth look at news from across the continent | DW | 31.03.2017

Undocumented Filipino migrants in the US anxious as deportation looms 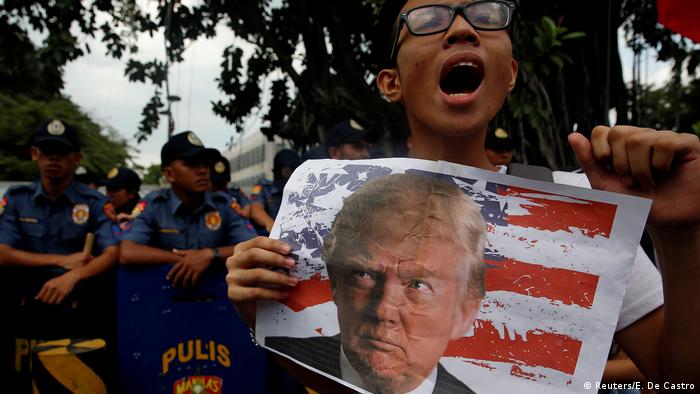 News of the first Filipino migrant deported under the Trump administration has sent waves of anxiety and paranoia among the hundreds of thousands of undocumented Filipino migrants in the United States.

On March 17, Rey Galleon had just dropped off his son at school in Southern California and returned home when he found Immigration and Customs (ICE) agents waiting for him.

The ICE officers brought Galleon, a former crewman living in the US for the last 7 years, to a homeland security base and gave him two options: detention or deportation. Galleon was on board a plane on his way back to the Philippines that same day.

Stories like this terrify Lou-Lou, a Filipino living in a southern state. The 60-year-old, who asked that her real name not be used, was on holiday in the US when she met and married her American husband in 2011.

Due to their limited earning capacity, the couple has not met the income requirements to apply for permanent resident status under a spousal visa.

Philippine senator: 'No other recourse except to impeach' Duterte

Philippine Senator Antonio Trillanes is one of President Rodrigo Duterte's staunchest critics. The lawmaker spoke to DW about the leader's contentious anti-drug campaign that has led to thousands of deaths. (22.03.2017)

Philippine President Rodrigo Duterte has lashed out at the EU, calling them "sons of bitches" after the bloc called for rehabilitation clinics for addicts. Duterte made his remarks during a speech to Chinese businessmen. (24.03.2017)

Philippine President Duterte wants more Filipino women to have access to contraceptives, which reportedly will run out in the Philippines by 2020 unless a Supreme Court order is overturned. Ana P. Santos reports. (13.03.2017)

What will a Trump Presidency mean for Filipino migrants in the US? What will be the consequences for Filipinos working for US companies in the Philippines? Ana P. Santos reports from Manila. (22.11.2016)

"I'm in danger right now. The government considers me illegal. I might be sent home," Lou-Lou told DW via telephone from the US.

Government statistics show an estimated 3.5 million Filipinos live in the US, with roughly about 300,000 considered irregular or undocumented. Filipino migrant groups say the number may be as high as a million.

Aurora Victoria David, secretary general of the National Alliance for Filipino Concerns (NAFCON) in San Francisco, says that this is not the first time that the US has employed a policy to rid the country of illegal migrants. Under President Barack Obama, an estimated 2.5 million undocumented migrants were deported between 2009 and 2015.

"But what is different now is the toxic rhetoric of President Trump targeted at immigrants," David told DW.

Since the election of Trump in November, the NAFCON has received an increasing number of reports of verbal assault and harassment, adding to the tension of Filipinos living under the radar.

Lou-Lou attested to this. "People tell me to my face, 'Go back to your own country' and 'You don't belong here.' I never had that before. I don't feel safe. I avoid going to the mall or the grocery alone."

A big obstacle is that many undocumented migrants are not aware that deportation can be contested and must be subjected to due process. "You can't be deported just like that. You can fight it through legal proceedings," explained David.

The NAFCON and other Filipino labor and migrant organizations have ramped up their efforts to conduct information classes and workshops to inform undocumented migrants about their rights.

In addition, the NAFCON is also worried about the possibility of the Trump Administration including the Philippines in a list of countries with travel restrictions. In a previous speech, Trump included the Philippines in a list of "terrorist nations." In January of this year, Trump rolled out the "Muslim Ban" prohibiting citizens from seven predominantly Muslim countries from entering the US.

The travel ban was heavily criticized for its vague implementation parameters that resulted in banning even citizens of the seven countries with permanent resident status in the US.

The uncertainty of what awaits them is a major source of paranoia for irregular Filipino migrants. And the seeming lack of support from the Philippine government is further aggravating their anxiety.

In a January press conference, President Rodrigo Duterte said he would not help illegal Filipino migrants deported by Trump.

"If you are not allowed to stay there, get out. If you get caught there and deported, I will not lift a finger," Duterte was reported as saying.

According to David, many Filipinos in the US were distressed by this statement, particularly because many supported Duterte's presidential bid last May.

"The statement of the president regarding Filipinos in the United States has to be put in its proper context," said Charles Jose, spokesperson for the Philippine Department of Foreign Affairs.

"As guests of the United States, Filipino citizens there have a responsibility to make sure that they follow all laws of that country. It is the same expectation that we have for our American and other foreign guests here in the Philippines," Jose told DW.

"Recognizing their contribution and support to the country's development, the Philippine government will always be on hand to provide timely and effective assistance to Filipino citizens wherever they may be in the world," Jose added.