Humanitarian flights have been refused access to Yemen, where millions of people face starvation. Saudi Arabia sealed all entry points to Yemen after Houthi rebels launched a missile attack on Riyadh's airport. 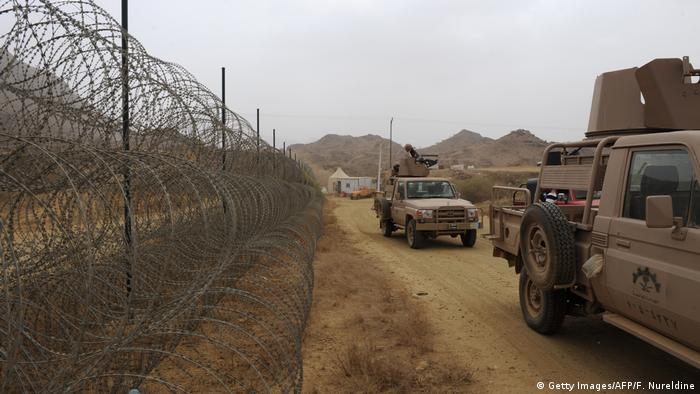 Saudi Arabia shut down Yemen's airports, land borders and sea ports on Monday following an attempted ballistic missile attack on an international airport servicing Saudi capital Riyadh. Saudi Arabia said the complete shutdown was a temporary measure but the blockade was slammed by the UN Office for the Coordination of Humanitarian Affairs (OCHA).

"The situation is catastrophic in Yemen, it is the worst food crisis we are looking at today, seven million people are on the brink of famine, millions of people being kept alive by our humanitarian operations," a spokesman for the office, Jens Laerke, told reporters in Geneva.

"If these channels, these lifelines, are not kept open it is catastrophic for people who are already in what we have already called the world's worst humanitarian crisis," Laerke said.

The UN rights office said it would study whether the blockade constituted an unlawful collective punishment, and said it hoped the measures were short term.

The World Health Organization said the Saudi blockade would stymie its efforts to fight cholera in Yemen, where more than 900,000 people are infected and more than 2,100 people have died.

The Saudi-led coalition said it sealed Yemen's borders to plug gaps that enable "smuggling of missiles and military equipment to the Houthi militias," which launched the ballistic missile attack on Riyadh's airport.

Human Rights Watch said the missile launch was "most likely a war crime" but urged Saudi Arabia against restricting aid access to Yemen.

"This unlawful attack is no justification for Saudi Arabia to exacerbate Yemen's humanitarian catastrophe by further restricting aid and access to the country," it said.

The UN said all of its humanitarian flights to Yemen had been grounded after they were refused clearance. Doctors Without Borders said its flight from Djibouti to the Yemeni capital Sanaa had also been canceled for the same reason.

Saudis lash out at Iran

"The involvement of Iran in supplying missiles to the Houthis is a direct military aggression by the Iranian regime," the Saudi Press Agency quoted Saudi Arabia's powerful Crown Prince Mohammed bin Salman as saying during a telephone conversation with British Foreign Secretary Boris Johnson.

This "could be considered an act of war," he said.

Iranian Foreign Minister Mohammad Javad Zarif said: "The Saudis are acting like hooligans in the region, are making the region unsafe and then end up trying to blame Iran for their dangerous policy."

More than 8,650 people have been killed in Yemen since Saudi Arabia launched a military intervention in support of Yemen's internationally-recognized government in 2015.

The latest tensions came amid a massive purge of Saudi Arabia's elite in a supposed anti-corruption push.