The United Nations has sent over $9 million in emergency relief funds to Venezuela in order to combat the country's humanitarian crisis. The country faces medicine and food shortages under President Nicolas Maduro. 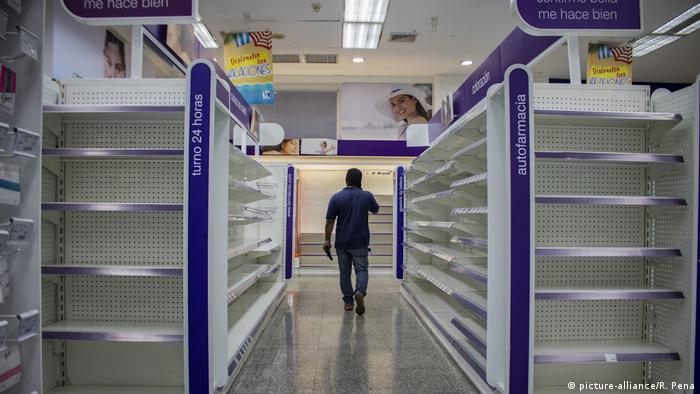 The United Nations in Geneva has released $9.2 million (€8.1 million) in emergency humanitarian aid for Venezuelans, who are suffering from medicine and food shortages due to a spiraling political and economic crisis under President Nicolas Maduro.

The aid comes from the Central Emergency Response Fund (CEFR) fund, which is being accessed for the first time since the crisis in Venezuela began around five years ago. Such funds generally require the recipient country's approval.

Monday's announcement marked a turnaround from Maduro, who had previously repeatedly insisted that the country does not need outside help and cracked down on critics.

The UN said the supplies were to be delivered with the agreement of the Venezuelan government. The funds include $2.6 million for the nutritional support of children, pregnant women and lactating mothers.

Around 12 percent of Venezuelans are undernourished, the UN reported.

Separately, the UN International Children's Emergency Fund (UNICEF) also announced it would expand its existing aid programs in Venezuela, where it has been present since 1991. Since August, UNICEF has flown in nearly 130 tons of medicines, health and nutrition supplies for 350,000 women and children.

While Maduro critics said the acceptance of aid showed government acknowledgement of a humanitarian crisis, others feared that the funds could end up lining the pockets of ruling Socialist politicians.

Maduro has blamed outside "imperialist" forces, such as the US, for the country's deteriorating situation that includes hyperinflation, the spread of preventable diseases and a wave of emigration to neighboring countries.

Peru, Paraguay, Chile, Argentina, Colombia and Canada have demanded the UN-backed court in The Hague look into Nicolas Maduro's alleged crimes. The unprecedented call came at a crucial moment for global institutions. (26.09.2018)

Inside Europe: Venezuelans flee to Spain