The UN Security Council has voted to impose restrictions that "prevent and suppress" extremist groups like the "Islamic State." US and Arab aircraft, meanwhile, have resumed strikes against against IS targets in Syria. 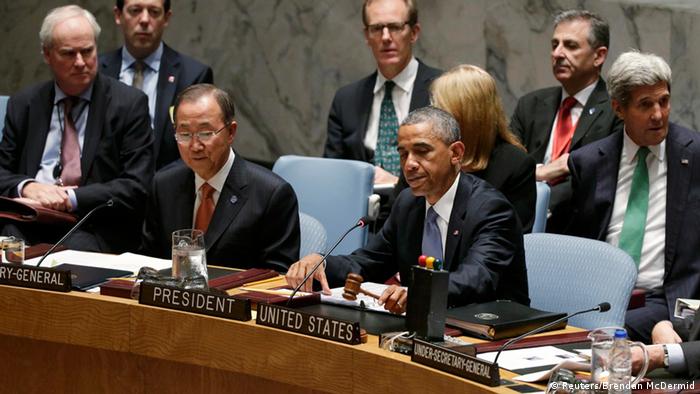 "This is only the sixth time the Security Council has met at level like this," US President Barack Obama told the 15-member body on Wednesday in a special session.

The members just minutes earlier had passed a binding resolution in a unanimous vote. The 193 nations of the UN are now obligated to hinder the spread of extremism, a decision prompted by the sudden emergence of "Islamic State" (IS) fighters in Syria and Iraq.

Roughly 15,000 foreign fighters originating from 80 nations are believed to have traveled to Syria in recent years, according to the US president.

Following the UN resolution, the Pentagon announced that the US and its Arab allies had launched more airstrikes against IS targets in Syria.

The strikes in Syria, which began Tuesday, are part of a larger military campaign to combat IS. Four Arab countries - Bahrain, Saudi Arabia, Jordan and the United Arab Emirates - participated in the attacks, while Qatar provided support.

The Pentagon provided no further details of Wednesday's operation, but said it was ongoing.

Obama reminded Security Council representatives that despite the "historic decision" reached on Wednesday, legal action - including banning the recruitment of foreign fighters and preventing extremists from traveling abroad to fight alongside terrorist groups - was only the first step.

"[The] resolution will not be enough. Promises on paper cannot keep us safe. Lofty rhetoric and good intentions will not stop a single terrorist attack. The words spoken here today must be matched and translated into action, into deeds ... for years to come," he said.

The US president had addressed the UN General Assembly earlier in the day, where he, along with other foreign leaders appealed for the international community to combat IS and allied militants before it was too late.

"We must defeat the poisonous ideology of extremism," he said, emphasizing that the UN countries must "use all of the weapons at our disposal."

In addition to reinforcing counterterrorist efforts, officials must identify and uproot sources of hatred, which were just as insidious as blatant support for violence, he said, the propagation of conspiracy theories regarding terrorist attacks on the West being just one example.

"There are no easy answers or quick fixes," Cameron said.