The United Nations has appealed for $22.5 billion to provide humanitarian aid to more than 90 million people next year. Armed conflicts and natural disasters have driven up the estimated aid total to a record level. 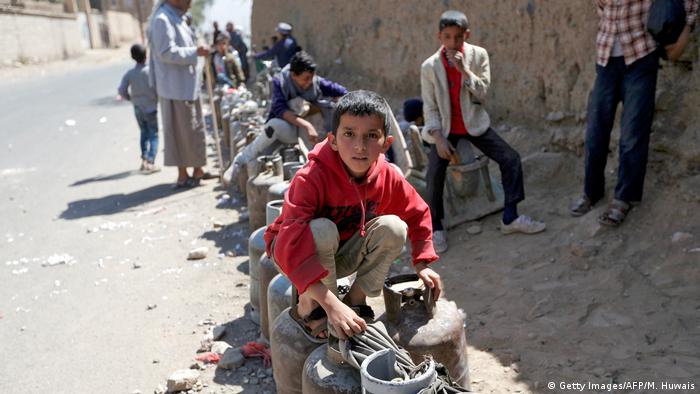 The UN launched its annual aid drive on Friday asking donors around the world for a record-high amount of $22.5 billion (€18.9 billion) to pay for humanitarian aid in 2018.

UN agencies and other humanitarian organizations said the sum would help a targeted 90 million people that the world body considers "the most vulnerable."

Nearly 136 million people are predicted to need aid in 26 countries in 2018, rising over 5 percent from last year's estimate.

"More people than ever before will need our assistance," UN humanitarian affairs chief Mark Lowcock said in a statement.

The chances that the UN and aid organizations will be able to raise the amount looked slim. Last year, donors fell short of the $22.2 billion requested last year for 2017, donating only $13 billion for aid.

Syria, Yemen are most in need

Wars and natural disasters around the world have driven up the cost of and need for humanitarian aid, the UN said.

Yemen will likely remain the world's worst humanitarian crisis, where 7 million to 8 million people are "right on the brink of famine," Lowcock said. He also called on the military coalition led by Saudi Arabia to fully lift its blockade on Yemen.

"That blockade has been partially wound down but not fully wound down. It needs to be fully wound down if we are to avoid an atrocious humanitarian tragedy involving the loss of millions of lives, the like of which the world has not seen for many decades," he said.

A total of $2.5 billion in aid will be needed for Yemen alone. However, Syria topped the list as the country most in need of humanitarian aid with $3.5 billion for assistance inside the war-torn country and another $4.16 billion for the needs of the country's 5.3 million refugees and the communities hosting them.

"Exceptionally high levels" of need are also expected in Nigeria and South Sudan.

Noting that some progress had been made, the UN said humanitarian needs in several countries including Afghanistan, Iraq and Ukraine had declined slightly, but the needs "remain significant."

Women Nobel laureates have demanded that Yemen's blockade be ended by the Saudi and Emirate-led military coalition. Its "collective punishment" has put 7 million children and women near famine, they say. (27.11.2017)

With Moscow's backing, the Syrian government has agreed to a ceasefire in rebel-held Eastern Ghouta. But as another round of UN talks prepare to start in Geneva, heavy shelling in the area killed three on Tuesday. (28.11.2017)