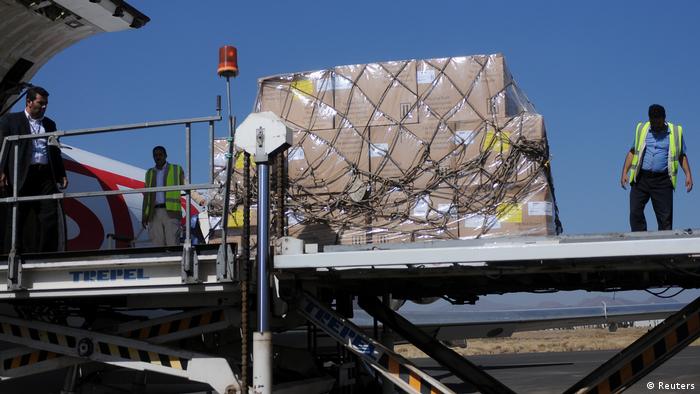 A ship carrying around 5,500 tons of flour docked in Yemen's rebel-held port of Hodeidah on Sunday, marking the first food aid delivery to the besieged country since November 6.

The Saudi-led coalition had closed all air, land and sea access to Yemen, a measure it said was intended to halt Iranian weapons shipments to the country's Houthi rebel forces. The blockade was implemented after Saudi Arabia intercepted an alleged Houthi missile launched towards its capital, Riyadh. Iran has denied arming the Yemeni rebel forces.

With some 7 million people in Yemen estimated to rely on food aid, the blockade had come under immense rebuke from multiple aid agencies, as well as the United Nations.

Abir Atifa, a spokesperson for the World Food Programme's Middle East and North Africa operations, said some 25,000 tons of wheat is set to be offloaded early on Monday.

Aid agencies have accused Saudi Arabia and its allies of aggravating Yemen's already desperate humanitarian crisis by imposing the blockade.

Shortly after the closure, UN aid chief Mark Lowcock warned that the blockade could spark the largest famine the world has seen for many decades, with millions of victims.

Almost 9,000 people have been killed since the Saudi-led coalition began laying siege to Houthi rebel-held areas of Yemen. Millions more face the risk of a deadly cholera epidemic.

On Friday, the charity Save the Children said that around 20,000 Yemeni children under the age of five were falling into severe malnourishment every month, "an average of 27 children every hour."