Hundreds of thousands of Ukrainians have fled to Germany from the war. This weekend, they will celebrate Easter with other Orthodox Christians, where denominational boundaries lose their significance in desperate times. 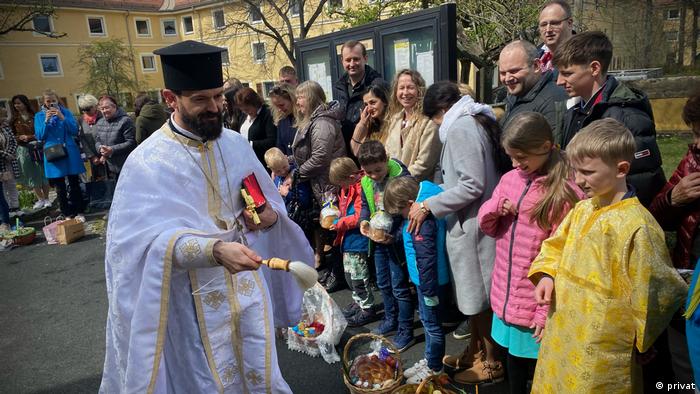 "Our parishes have more than doubled their services," says Bohdan Luka, a priest at the Ukrainian Greek Catholic Church (UGKK) in Saxony. Last weekend the Ukrainian religious leader celebrated three Easter services in three parishes in eastern Germany: In the afternoon in Halle, in the evening in Chemnitz, and then early in the morning in Dresden. "The celebrations," he says, "were packed. Since Russia's invasion of Ukraine and the flight of hundreds of thousands, more and more people in Germany are seeking out [religious] services."

Easter, he says, "stands for the hope that everything will turn out all right after all, even if everything looks hopeless." He addressed the war in Ukraine in his sermons over the weekend, bringing up the grief and hopelessness of Jesus' disciples, the plight of the women who, according to the Bible, wanted to go to Jesus' tomb. "You know, we Ukrainians are actually very hopeful people."

The symbolism of Easter bread

This weekend, Luka will again read Easter texts and bless the Easter breads of the faithful. Two Easters is unusual. The UGKK congregations in Germany largely base their Easter dates on the Western calendar of Germany's Catholic and Protestant churches, but new arrivals have brought other traditions to Germany. In Ukraine, churches celebrate Easter according to the Orthodox Eastern calendar, which makes it this weekend.

Many refugees are not prepared for the new calendar, says Luka. For them, April 24 is Easter Sunday, so he will also preach on Easter and bless the bread that day too. "This blessing of the breads has very high symbolic meaning," he told DW. "People take the bread home for family celebrations." And Luka expects churches to be full, as they were last week. 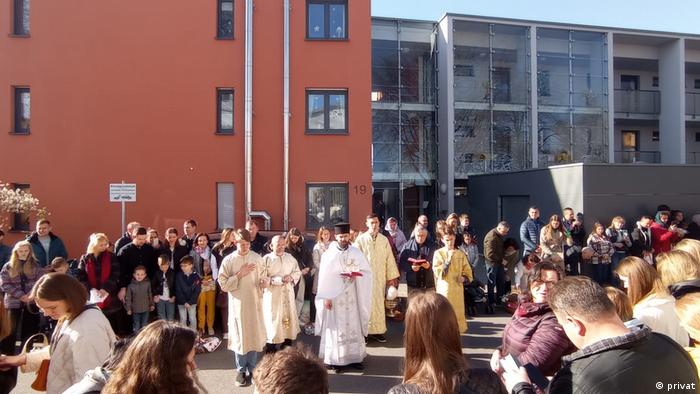 'There are more and more'

Luka does not know how many believers in Germany now belong to his church. Until the war in Ukraine began at the end of February, the official figure was always just under 80,000. "That number can easily be doubled today, or more," said Andriy Dmytryk, chancellor of the UGKK exarchy. And it will probably continue to rise: Christianity is widespread in Ukraine; before the war, some 5 million people belonged to the Ukrainian Greek Catholic Church alone.

Dmytryk's authority extends to congregations in both Germany and Scandinavia. In Germany, this covers parishes in about 50 towns, from Hamburg in northern Germany to Rosenheim in the south, as well as several cities in the east of the country, including Dresden, Chemnitz, and Halle.

But numbers have been swelled by the war. "The picture changes every week, every moment," said Dmytryk. He cites Rostock in northeastern Germany as one example. Before the war, the congregation there would have numbered 40 to 50 believers at most. Today, 160 people show up for services.

Always on the road to believers

And, the chancellor continues, Ukrainian believers are now reporting from almost from every city in Germany. He cites Neumarkt, southeast of Nuremberg, where until now, there has been no pastoral care for Ukrainians. Now there are 300 Ukrainian-speaking Christians there hoping for an Easter service this weekend.

This has brought new challenges to the Ukrainian church in the exarchy, which has just 22 clergy. For them, Easter can be stressful. Andrii Khymchuk, a Ukrainian priest, is responsible for congregations in Bamberg, Würzburg, and Nuremberg. "Every weekend, I travel 360 kilometers. Honestly, it's difficult," the 35-year-old says.

In Würzburg, his smallest congregation, where usually only 20 people come to worship, there have been more than 100 people on weekends, he says. At the beginning of the month, he welcomed 600 believers to a service in Nuremberg, a crowd he had never seen before. And now Ukrainians from Ansbach, where there had never been an offer from his church, had come forward: Some 120 Christians there are hoping for an Easter service.

But Luka in Halle and Khymchuk in Bamberg, like other Ukrainian priests in Germany, welcome believers of all Christian denominations to their celebrations. "Not only Greek Catholic Ukrainians come there, but also Orthodox and Protestants," Khymchuk said. They all hoped for pastoral support, in Ukrainian or even Russian. There are no major differences in the texts, chants, and customs.

Chancellor Dmytryk knows this. "For people from Ukraine, the most important thing is that they are welcomed, that the pastor is friendly and listens to them, that he shares the concern for the husband or relatives back home," he said.

Dmytryk, as a member of the bishop's staff, is plagued by another issue. The 22 priests have become doubly overworked because so many refugees are traumatized by the war and are seeking pastoral care. This begins, says Khymchuk, with the coffee and cake after the service. "People get to know each other, give each other encouragement, network. They learn where they might get government support," he said.

And they can hope for concrete help from their churches. Since the end of February, congregations have been collecting relief supplies at all of the 50 or so locations the UGKK had in Germany before the war. Dozens of trucks and semis rolled eastward towards Ukraine, bringing hundreds of tons of food, clothing, and medical supplies to the crisis region.

Now, about half of the donations are still on their way, and the rest will go to new arrivals in the communities. Khymchuk said, "The people here now need not only our pastoral care, but also material help. After all, they have almost nothing left."

It's official: An independent Orthodox Church of Ukraine has been born with the blessing of Patriarch Bartholomew I. Ukraine's President Petro Poroshenko heralded the split from Russia, but Moscow is less than pleased.

Ukrainian emergency services say at least three people were killed and another dozen wounded. The strikes come as Russian forces continue to lose ground to Ukraine's counteroffensive in the south and east.