Ukraine's new Orthodox church, backed by President Petro Poroshenko, who is up for re-election, has enthroned its leading cleric. Moscow is fuming over Kyiv's break after three centuries of Russian Orthodox influence. 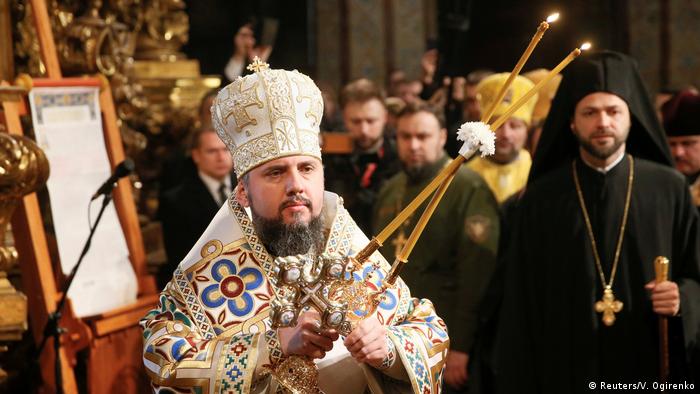 Metropolitan Epiphanius I was enthroned in Kyiv Sunday as head of the Ukrainian Orthodox Church, two months after its independence — known as "Tomos" — was recognized by the Orthodox world's Istanbul-based patriarch, Bartholomew I.

The inauguration, broadcast on Ukrainian television, was described by President Petro Poroshenko as the "completion" of the new church formation he has spearheaded in recent months.

The move leaves clergy and believers in Ukraine to choose between the new church (which unites two formerly schismatic entities) and the Moscow-backed church, which historically maintained property in Ukraine. 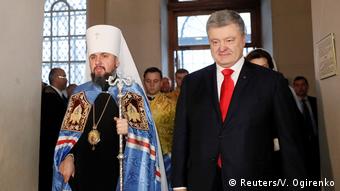 In mid-January, Ukraine's parliament adopted a bill on procedures for parishes to decide on how to handle transfers of church property, including rentals to estranged Russian-affiliated parishioners. On passage, Poroshenko said it would prevent "bloodshed."

He was elected in 2014 on promises to shut down the Russia-backed conflict.

Both candidates favor Ukrainian bids — opposed by Russia — to join the European Union and NATO. Tymoshenko, however, accuses Poroshenko of ignoring corruption during warfare between Kyiv and Russia-backed rebels in eastern Ukraine.

Epiphanius, 40, who was elected by fellow bishops in December, had previously helped organize humanitarian aid for Kyiv's army in its struggle against separatists.

Moscow fury over accord

Moscow reacted furiously in early November when an initial independence accord was signed by Poroshenko and Bartholomew I in Istanbul, the former Constantinople, which is also seen as the home of Orthodoxy's worldwide Ecumenical Patriarchate.

Last year, the Russian Orthodox Church last year broke ties with the Istanbul-based Ecumenical Patriarchate, which is headed by Bartholomew, who in early January formally handed over the Tomos, enshrining church independence to Epiphanius I.

He asserted that the split was rooted in "the struggle for power" and provoked "animosity and intolerance," warning that Russia reserved the "right to react and will do everything to protect human rights, including freedom of conscience."

Moscow's Patriarch Kyrill I said he still hoped to meet in Kyiv with other bishops who he said were still defending "canonized Orthodox Christianity."

The global Orthodox population numbers up to 300 million persons, grouped within about 350 churches, according to the Ecumenical Council of Churches based in Geneva.

About 70 percent of Ukrainians are Orthodox.About 1 million Orthodox Christians live in Germany.