Ukrainian President Volodymyr Zelenskyy has addressed a special sitting of the European Parliament amid Russia's onslaught. Zelenskyy said he was convinced his compatriots had earned the right to be considered equal. 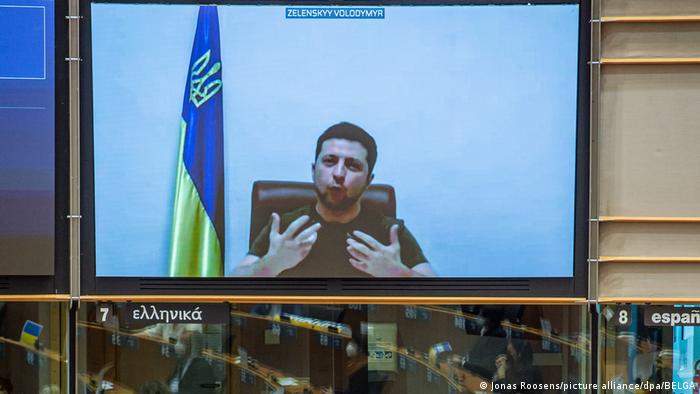 The Ukrainian president on Tuesday addressed the European Parliament by videolink, saying Ukraine had earned the right to be immediately accepted into the bloc as a member.

President Volodymyr Zelenskyy's plea to be accepted came on the sixth day of Russia's invasion of Ukraine, amid rising concerns about civilian casualties.

What did Zelenskyy say?

Zelenskyy addressed the European Parliament in an emotional message, explaining that he was doing so amid a break in missile strikes.

The president outlined his belief that Ukraine deserved to be part of the EU, and that it had shown so in its fight for survival.

"I believe that we, today, we're giving lives for the desire to be equal, as much as you are," Zelenskyy said. "We are giving away our best people."

He highlighted the plight of the city of Kharkiv, which was hit by missile attacks on Monday and Tuesday. But he added: "Nobody is going to break us. We are strong. We are Ukrainian."

"The EU will be much stronger with us. Without you, Ukraine will be lonesome."

There was a standing ovation from EU lawmakers, many wearing #standwithUkraine T-shirts emblazoned with the Ukrainian flag, others with blue-and-yellow scarves or ribbons.

Ahead of Zelenskyy's address, European Parliament chief Roberta Metsola had said she condemned the Russian invasion of Ukraine "in the strongest possible states."

She said the EU would support war crimes investigations against both Russian President Vladimir Putin and Belarusian leader Alexander Lukashenko.

Metsola also underlined the EU's sanctions against Russia and said: "This must be our whatever it takes moment."

McAllister: 'We support Ukraine in a European perspective':

What support is there for Ukraine's membership?

The presidents of the Czech Republic, Estonia, Latvia, Lithuania, Poland, Slovakia and Slovenia on Monday all signed an open letter calling for Ukraine to receive EU candidate status.

Romanian President Klaus Iohannis on Tuesday also backed the membership plea for Ukraine, as well as Moldova, Hungary and Georgia.

European Commission President Ursula von der Leyen has spoken in favor of Ukraine joining the EU, but the decision must be taken unanimously by all EU member states rather than the executive arm in Brussels.

However, German Foreign Minister Annalena Baerbock on Monday cautioned against a hasty accession of Ukraine.

"EU accession is not something that can be achieved in a few months," Baerbock said, while emphasizing that Ukraine is "part of the house of Europe."