Ukraine has alleged that the Russian tanker took part in a November confrontation in the Kerch Strait. The 10-member crew was allowed to leave Ukraine as it had not taken part in the incident last year. 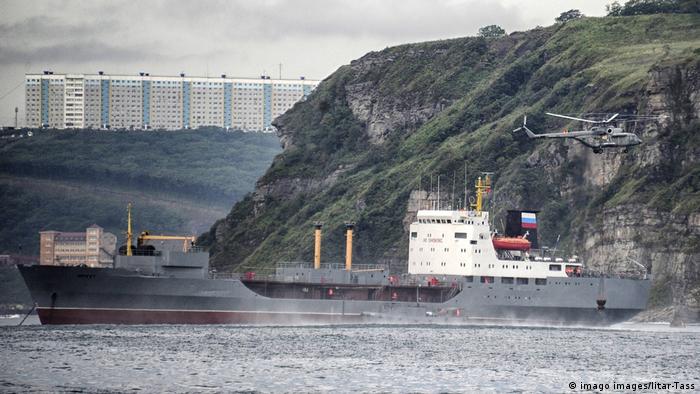 Ukraine has seized a Russian tanker in the Black Sea, alleging that it was used in an operation to block Ukrainian vessels from sailing through the Kerch Strait, the Ukrainian Security Service (SBU) said in a statement on Thursday.

The SBU said it stopped the Russian vessel Neyma upon entering the port of Izmail, located in the southwest Odessa region of Ukraine.

"If Russians are taken hostage, this would be interpreted as the crudest violation of international law, and consequences will not be long in coming," a ministry spokesperson said.

On Thursday, the 10-member crew was allowed to disembark and leave Ukraine as they were not involved in the November incident, Russian human rights ombudswoman Tatyana Moskalkova said.

The SBU said the Russian vessel was used to block three Ukrainian warships in the Kerch Strait during a naval confrontation last November.

The Russian ship's name was subsequently changed to Nika Spirit, which the SBU said was done to "conceal" its "involvement in illegal acts."

During the November skirmish, Russian ships fired on the Ukrainian vessels in the Kerch Strait, a waterway that links the Black Sea and the Sea of Azov. The conflict sparked a political crisis between the two former Soviet nations amid already strained relations.

At the time, Russia claimed that the Ukrainian ships, which were en route from the Black Sea port of Odessa to the Sea of Azov port of Mariupol, had entered Russian waters illegally. Russian forces later seized the three naval vessels and detained 24 Ukrainians on board.

Relations between Russia and Ukraine have been tense since Russia annexed the Crimean Peninsula from Ukraine in 2014. Tensions increased when Russia opened a bridge that connects its Krasnodar region with the Crimean city of Kerch.

Moscow and Kyiv are locked in dispute over an incident in the Kerch Strait off the coast of the Crimean Peninsula. What is it all about? (26.11.2018)