Ukraine puts army on combat alert along border with Crimea

Ukrainian President Petro Poroshenko has put the army on combat alert along the border with Crimea and the line of contact with Russia in the east. This follows Russian accusations of Ukrainian incursions into Crimea.

Poroshenko said on Thursday that he had met Ukraine's top military brass as well as foreign ministry officials to discuss the latest tensions between Ukraine and Russia.

"I ordered a high-alert level on the administrative line with Crimea and contact line in eastern Ukraine," he said on Twitter.

A spokesman for Ukraine's General Staff told the Reuters news agency, meanwhile, that Ukraine had been holding scheduled military exercises in southern Ukraine since Wednesday.

The German foreign ministry on Friday expressed concern over the latest developments, saying it was in touch with representatives from Ukraine and Russia.

"We are urgently calling on them to avoid any actions that could lead to a further escalation of the situation," the ministry said in tweet.

Putin also held a meeting on Thursday with security chiefs to discuss "additional measures for ensuring security for citizens and essential infrastructure in Crimea," the Kremlin said in a statement.

Russian intelligence agency FSB said this week that one officer and an army soldier had been killed at the weekend in two incidents while fending off what it described as attacks by Ukrainian "saboteurs" in the Black Sea peninsula that was annexed by Russia in March 2014 following a referendum. 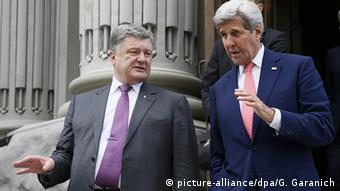 The Russian claims that Ukraine attempted a terrorist attack in Crimea are unverified, an EU foreign policy spokeswoman said on Thursday, although she said the Organization for Security and Co-Operation in Europe (OSCE) had no access to the occupied peninsula.

"There has been no independent confirmation of the claims made by the Russian authorities," the spokeswoman says in a statement. "We reiterate our condemnation and non-recognition of the illegal annexation of Crimea and Sevastopol by the Russian Federation," the statement read.

"The EU calls for a peaceful resolution of the conflict, including in eastern Ukraine, where all parties - including Russia - must fully engage in the complete implementation of the Minsk peace agreements," the spokeswoman added.

Meanwhile, the FSB said the Ukrainian Defense Ministry's intelligence agency was targeting Crimea's critical infrastructure, which the ministry has denied. Yuriy Tandit, an adviser to the head of Ukraine's security agency, told Interfax-Ukraine that Kyiv had no intention of taking back the territory "by force."

Pro-Russian separatist leader Igor Plotnitsky has been injured in a blast in the city of Luhansk in eastern Ukraine. Regional officials say the bomb was an assassination attempt. (07.08.2016)