With fresh violence in Ukraine, is there hope for a solution? | Europe | News and current affairs from around the continent | DW | 05.08.2016

The UN has reported a major spike in civilian casualties due to fighting in Ukraine. DW spoke with the OSCE's monitoring mission to find out why the conflict has taken another violent turn and if there is a solution. 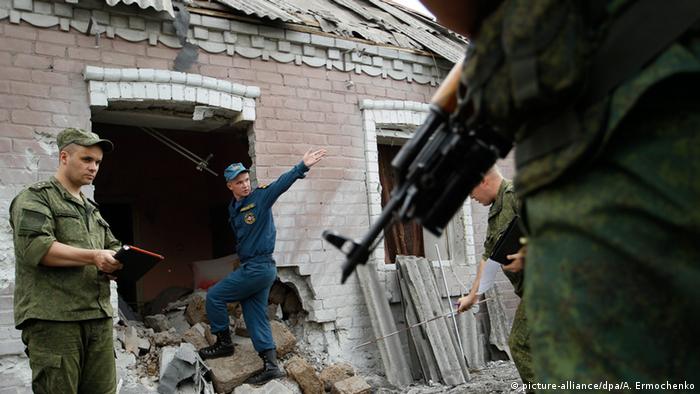 UN High Commissioner for Human Rights Zeid Ra'ad al-Hussein this week announced that fighting in eastern Ukraine prompted a surge in civilian casualties in June and July, marking the highest number since August 2015.

The war in eastern Ukraine has arrived at the Sea of Azov port town. The city center is deserted, the situation uncertain. One in five people here is an inland refugee. Christian F. Trippe reports.

"The escalation of hostilities and the accompanying civilian casualties in eastern Ukraine over the last two months are very worrying," al-Hussein said in a statement.

"Civilians are once again having to flee to improvised bomb shelters in their basements, sometimes overnight, with increasing frequency - the price of the ceasefire violations is too high for the women, men and children in eastern Ukraine," he noted.

At least 9,500 people have been killed in the armed separatist insurgency that erupted in 2014. The conflict followed pro-democracy protests in the capital Kyiv, which effectively led to the ouster of Kremlin-backed Ukrainian President Viktor Yanukovych.

The fighting has sparked a humanitarian crisis by internally displacing 1 million people and directly affecting over 500,000 children, according to the UN.

"We urge all sides to respect the ceasefire provisions, to remove combatants and weapons from civilian areas, and to scrupulously implement the provisions of the Minsk agreements," he added.

The dangers of proximity

Minsk II, an agreement signed last year by members of the international community and representatives of conflicting parties, aimed to alleviate tensions in the separatist regions of the east.

The agreement aimed to have both parties of the conflict withdraw heavy artillery from the contact line in a bid to bolster the foundation of a bilateral ceasefire.

But violence has continued to fuel the conflict, with human rights organizations, including Amnesty International, accusing government forces and separatists of war crimes.

Alexander Hug, chief deputy monitor of the Organization for Security and Cooperation in Europe's (OSCE) Special Monitoring Mission in Ukraine, told DW that a pivotal reason for continued violence is the proximity of conflicting parties.

"A major reason for this is the close proximity of the conflicting forces in all of the locations where there is still fighting. They're often as close as 50 meters to each other, and that leads to tensions in the area, with these tensions often translating to raging battles," Hug said.

"These battlegrounds are not on an open field, they're often - if not in all cases - on the outskirts of towns and villages, and that draws civilians into the conflict when fighting erupts," he added.

Hug proposed three initiatives to ensure de-escalation, namely adherence to the ceasefire with accountability for individuals responsible for violating the cessation of hostilities, removal of military equipment and troops near civilian areas, and for both sides to separate from each other to a distance in which engagement is less possible.

One thing that would really help the situation is to "move the sides apart to a distance where engagement is less possible. Disengagement, or a separation of forces, is a very efficient tool that has also been used in conflicts to create a sustainable ceasefire," Hug said.

Meanwhile, the OSCE reported several instances in which their monitors had been threatened or prevented from doing their work on the ground, while the monitoring mission's unmanned aerial vehicles (UAV) have been targeted by artillery.

"So at the beginning of this equation stands the monitoring activity of the OSCE's special monitoring mission," he concluded.