Peace talks between separatists and Kyiv have broken down. Fifteen Ukrainian soldiers died in fighting from Friday to Saturday, marking the highest one-day death toll for the country's military in almost five months. 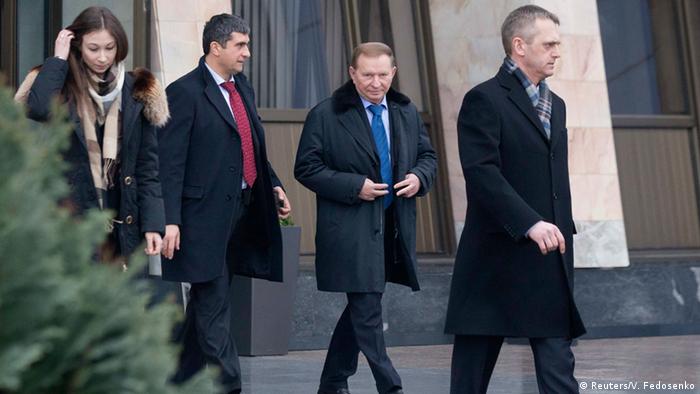 Talks in Minsk between Ukrainian, Russian and separatist envoys broke up Saturday. Former President Leonid Kuchma (pictured, second right) told Interfax-Ukraine that the summit in Belarus ended "in failure" after separatist leaders didn't show and their negotiators refused to discuss a plan for an immediate truce. Saturday's talks came after an attempt Friday had failed.

Kuchma said separatist officials present at the talks had delivered ultimatums and refused to negotiate "a quick ceasefire and a pullback of heavy weapons," Interfax reported on Saturday.

US Secretary of State John Kerry will meet next week with Ukraine's leadership in Kyiv. Kerry also plans to meet Russian Foreign Minister Sergei Lavrov at a security conference in Munich from February 6-8, the State Department announced on Friday.

The United States and EU have levied heavy sanctions on Russia for the country's perceived support of separatists in Ukraine. After speaking on Wednesday, German Chancellor Angela Merkel and US President Barack Obama expressed concern over continued fighting.

Conflict has claimed 5,100 lives since April

Last week, the separatists vowed to press on with their offensive, even in the face of a heavy government crackdown. Much of the recent fighting in Ukraine has been concentrated around Debaltseve, a government-held town that also serves as a major rail and road hub connecting the rebel-held cities of Donetsk and Luhansk.

Saturday's renewed fighting in Ukraine follows a series of separate shelling attacks on Friday that killed more than 20 civilians in Donetsk, Debaltseve and other areas. Debaltseve's 25,000 inhabitants have been without electricity, running water and household gas for more than a week.

"In the last day, 15 soldiers died and 30 more were wounded," said Ukrainian Defense Minister Stepan Poltorak. "That is the figure for the whole frontline."

The conflict has claimed 5,100 lives since April and displaced more than 900,000 people across Ukraine, according to UN estimates. In early January, after a month of relative quiet, full-blown fighting broke out again as the separatists attempted to claw back additional territory from government hands.

Separatist leaders have accused Ukraine of mobilizing its forces in advance of an imminent offensive. However, the separatists are also attempting to take the neighboring town of Vuhlehirsk and the southeastern port city of Mariupol.

"The toughest situation is in the Vuhlehirsk area, where the terrorists are trying to seize the town and occupy positions to move forward and encircle Debaltseve," military spokesman Andriy Lysenko said on Saturday.