Ukraine crisis: 'Our goal is to avoid a war in Europe,' says Germany's Scholz

In the latest push for a diplomatic solution to the rising tensions, the leaders of Germany, France and Poland gathered in Berlin. German Chancellor Olaf Scholz said all three were united on their assessment. 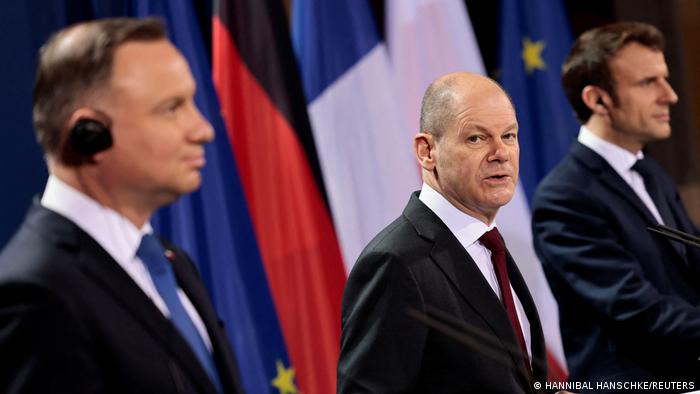 German Chancellor Olaf Scholz hosted French President Emmanuel Macron and Polish President Andrzej Duda in Berlin on Tuesday, on the heels of talks with US, Russian and Ukrainian leaders.

The three were meeting over fears about Russia amassing military hardware and more than 100,000 troops near the border with Ukraine.

"The leaders call on Russia to de-escalate the situation at the Ukrainian border and engage in a meaningful dialogue on security on the European continent," the German government said in a statement. "They underscore that any further military aggression by Russia against Ukraine will have massive consequences and severe costs."

Scholz said the NATO allies were in agreement on the situation at present and what the consequences should be if Ukraine's territory and sovereignty were violated.

"Our common goal is to avoid a war in Europe," said the chancellor, flanked by Duda and Macron.

"The deployment of Russian troops on the border with Ukraine is very worrying and our assessment of the situation here is very much the same," he said.

"Just as our attitude is that further violation of the territorial integrity and sovereignty of Ukraine is unacceptable and would have far-reaching consequences, politically, economically and certainly also geo-strategically."

Scholz: 'A violation of Ukraine's territorial integrity is unacceptable'

Polish President Duda said the three countries would not give up in their efforts to de-escalate tensions between Moscow and Kyiv.

"We have to find a solution to avoid war," said Duda. "As I've said, this is currently our main task. I believe that we will achieve it. In my opinion what's most important today is unity and solidarity."

French President Macron called for security talks with Moscow in order to stress the inviolability of Europe's borders.

"We must together find ways and means to engage in a demanding dialogue with Russia," said the French president.

Macron is seeking to revive the "Normandy Format" peace talks — aimed at bringing to an end fighting in eastern Ukraine, in which more than 14,000 people have died.

Leaders from the "Normandy Format" last met in Paris in 2019. However, envoys from the four countries involved — France, Germany, Russia and Ukraine — are to meet on Thursday in Berlin.

Tuesday's meeting came  after Russian President Vladimir Putin told Macron that Russia "would not be the source of an escalation" during talks in Moscow a day prior.

On the heels of those talks in Moscow, Macron met Ukrainian President Volodymyr Zelenskyy , who said he would welcome concrete steps from Putin for de-escalation, but added that he didn't "trust words in general." German Foreign Minister Annalena Baerbock also visited the front line in the eastern Ukrainian region of Donbas on Tuesday.

It also follows Scholz's meeting with US President Joe Biden on Monday where the pair threatened Russia with grave consequences if it invades Ukraine.

Biden vowed that the Nord Stream 2 Russia-to-Germany gas pipeline, which has been completed but has not yet started operating, will not be allowed to proceed.

Scholz refrained from explicitly mentioning the project, which has long been a source on contention between Berlin and Washington. Pulling the plug on Nord Stream 2 would prove economically damaging to Russia, but it would also cause energy supply problems for Germany.

Scholz will also travel to Kyiv and Moscow on February 14-15.

The talks in the German capital under the so-called "Weimar Triangle" format, which takes between leaders of the three countries at times of crisis.