Top diplomats from the 46-member Council of Europe have met "against the background of the aggression of the Russian Federation against Ukraine." Russia remains excluded from the group. 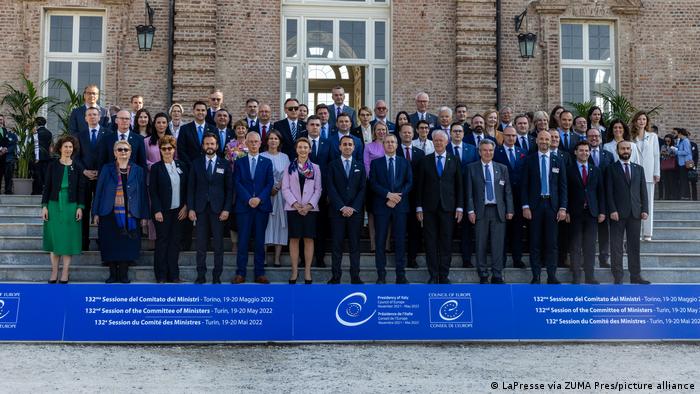 Foreign ministers from 46 nations in the Council of Europe convened in Turin, Italy on Friday as Russia presses forward with its invasion of Ukraine.

Russia has been expelled from the organization due to the Kremlin-backed decision to attack its neighbor in February.

What was on the agenda?

According to a press statement on the Council of Europe website, the meeting was an occasion for the "ministers to show their support for and solidarity with Ukraine and its people."

Ireland took over the presidency of the Committee of Ministers from Italy during the meeting. The presidency rotates between member countries every six months.

The ministers also discussed the state of human rights, democracy and press freedom in Europe, among other topics. The Council of Europe issued guidelines to member states on how to prevent and combat hate speech, both online and offline.

In addition, Parliamentary Assembly of the Council of Europe President Tiny Kox called for a summit of heads of state and government which would leave the council "better equipped to protect and promote democratic security."

"Then — and only then — will the Council of Europe be able to function as a cornerstone of Europe's political architecture," Kox added. "Russia's unilateral war of aggression against Ukraine has only increased the urgent need to strengthen this multilateral architecture."

Ahead of the meeting, German Foreign Minister Annalena Baerbock called for the organization to be strengthened following Russia's exclusion.

Baerbock said Germany will pay an additional €10 million ($10.5 million) to help the Council of Europe's budget, as Russia is no longer paying membership fees.

Germany's foreign minister said Russia's "inhumane, criminal" attack on Ukraine has shaken the Council of Europe to its core.

"A regime that attacks its neighbor, that bombs hospitals and schools, that murders and starves civilians can longer be a member of this council," Baerbock said.

The Council of Europe was founded in 1949 and is based in Strasbourg, France. The organization aims to safeguard democracy, human rights and rule of law in the continent.