Ukraine accuses Russia of firing on troops near Donetsk

Russian forces have attacked government troops in eastern Ukraine, according to officials in Kyiv. France, Germany, Russia and Ukraine are launching another attempt to restart talks on the conflict. 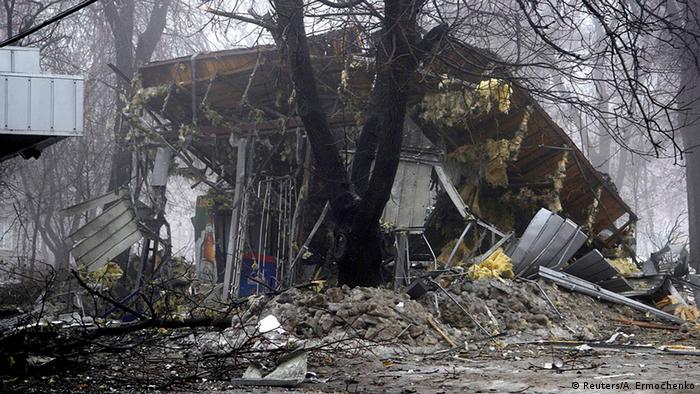 On Tuesday, Ukrainian officials said that Russian forces had opened fire on government troops in the country's east.

"In violation of all prior agreements, Ukrainian military units were attacked in the north by regular units of the Russian armed forces," army spokesman Andriy Lysenko said Tuesday at a press conference in the capital, Kyiv. "Ukrainian forces have stopped the advance of Russian troops ..." he added. "The situation in the conflict zone is serious but under our control."

The news came hours after German Foreign Minister Frank-Walter Steinmeier invited his counterparts from France, Russia and Ukraine to a meeting in Berlin on Wednesday to discuss the conflict. The resurgence in fighting during the last few days has led "to a threatening situation," Steinmeier said Tuesday in Berlin, and the participation of Russian regular forces - as opposed to Moscow's perceived material support of separatists in eastern Ukraine - would certainly add to the threat.

"The chief aim now is to prevent a further deterioration of the military conflict and a renewed political escalation between Kyiv and Moscow," Steinmeier said on Tuesday. "This is worth every effort."

Earlier Tuesday, Ukraine's government announced that it would deploy 50,000 volunteers and reservists in the country's east over three months. The additional forces reflect Ukraine's attempts to defend against what officials call Russian "aggression."

Ukraine's government has accused its neighbor of sending at least 700 troops across the border on Monday alone.

The conflict has left more than 4,800 people dead since fighting began in April despite a ceasefire agreed to in Belarus in September. A new truce reached in December swiftly unraveled earlier this month and led to the continuing confrontation at Donetsk airport and in the surrounding areas.

Donetsk airport is the most fiercely embattled area in eastern Ukraine. Pro-Russian separatists have been trying to seize what is believed to be the key to the city since last April. (20.01.2015)