Two of the victims in the Reading park stabbing were identified, one of them was a US national. The suspected attacker had prior convictions and had been flagged by MI5. 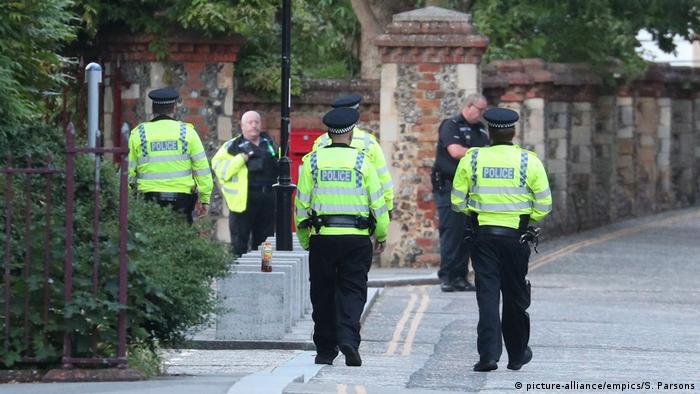 British Interior Minister Priti Patel on Monday warned that the threat from lone attackers was on the rise in the UK.

Her comments came two days after a man stabbed three people to death at a park in the southern English city of Reading. Authorities labeled the incident as a terror attack.

"The terrorist threat that we face is complex, diverse, and rapidly changing. It is clear that the threat posed by lone actors is growing," Patel told lawmakers in parliament.

On an earlier visit to Reading, Patel called the attack a "tragic, tragic event."

"We need to make sure that we learn the lessons from what has happened over the weekend to prevent anything like this from happening again," she said.

Witnesses to the attack described seeing the knife-wielding man walking through the park shortly after 7 p.m. local time and stabbing his victims at random. A police officer called to the scene managed to tackle the suspect to the ground.

Two of the victims who died in the stabbing were identified on Monday. One was a history teacher from the area and the other a US national from Philadelphia who had lived in the UK for 15 years.

US Ambassador to Britain Woody Johnson confirmed the death of the US citizen and offered condolences to everyone affected.

"To our great sorrow, this includes an American citizen," he wrote on Twitter.

The suspect was identified by authorities as a 25-year-old Lybian asylum-seeker, who briefly came to the attention of the domestic intelligence agency MI5 last year, local media reported.

He was ultimately deemed to not represent a substantial risk, but was "under surveillance." Popular daily newspaper The Sun reported that the man was recently released from prison and had prior convictions that included attacking a police officer.

Quoting relatives and former neighbors, newspaper The Telegraph wrote that the 25-year-old allegedly had a mental illness and was on medication.

Editor's note: In a bid to limit their exposure, DW has decided to withhold terror suspects' names.

The mayor of the northwestern Belgian city of Bruges has undergone emergency surgery after being stabbed in the neck. The suspect, allegedly a former client, has been arrested. (21.06.2020)

A man has been shot dead by police after stabbing two people in London. At least one of the victims is in life-threatening condition. Authorities have said they believe the terrorist incident is "Islamist-related." (02.02.2020)

A man reportedly ran into a mosque near Regent's Park in London and stabbed the muezzin during a late afternoon prayer. The attacker was arrested at the scene on suspicion of attempted murder. (20.02.2020)