Theresa May has said "now is not the time" for another referendum as her government prepares for Britain to leave the EU. Scotland's first minister called the decision a "democratic outrage." 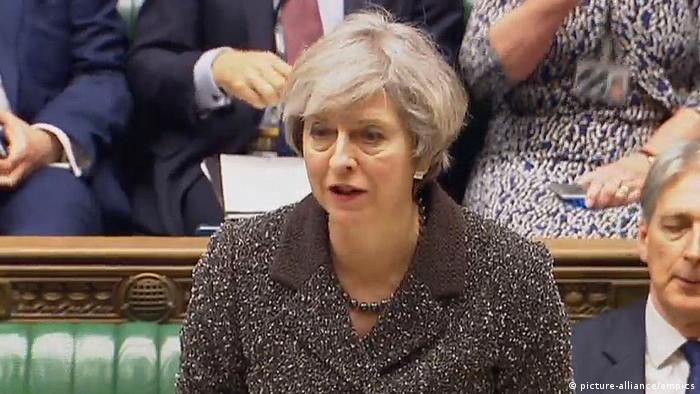 May rejected on Thursday Scottish First Minister Nicola Sturgeon's call to hold another independence referendum, as the British prime minister prepares to start the formal Brexit process later this month.

Sturgeon said earlier this week that she would seek another independence vote, and that it would ideally take place between autumn 2018 and spring 2019. But the Conservative-led British government must first approve the schedule for the referendum.

"Within that window, of when the outline of a UK deal becomes clear and the UK exiting the EU, I think would be a common sense time for Scotland to have that choice, if that is the road we choose to go down," Sturgeon said on Thursday during an interview with the BBC.

But May's government once again threw cold water on the Scottish leader's plan, saying "now is not that time" for such a vote. "All our energies should be focused on our negotiations with the European Union," the prime minister said, adding that such a referendum would "make it more difficult for us to get the right deal for Scotland and the right deal for the UK." May has not ruled out a future vote, although observers believe she is banking on Sturgeon's Scottish Nationalist Party (SNP) backing away from its plans to hold a new referendum.

Sturgeon herself was undeterred following May's statement, calling it a "democratic outrage" and insisting that "it is for the Scottish parliament - not Downing Street - to determine the timing of a referendum, and the decision of the Scottish parliament must be respected." She also criticized the prime minister's response in a series of tweets.

The Scottish leader may face some resistance to a referendum at home. Scottish Conservative leader Ruth Davidson, whose party holds the second-largest bloc of seats in the Scottish parliament after the SNP, cast doubt on Sturgeon's plan.

Scotland rejected independence by a margin of 55-45 in a referendum held in 2014, but the recent decision by Britain to leave the EU has renewed calls for another vote to take place.