Scottish First Minister Nicola Sturgeon has said she will seek authority for a new independence referendum once the terms of Britain's departure from the European Union are clear. The vote could take place in 2018. 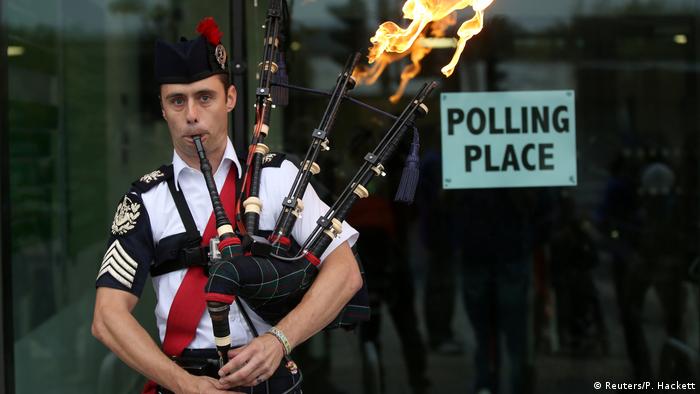 Scotland's leader said on Monday she will ask the British government next week for permission to hold a second independence referendum before the United Kingdom leaves the European Union.

"If Scotland is to have a real choice - when the terms of Brexit are known but before it is too late to choose our own course - then that choice must be offered between the autumn of next year, 2018, and the spring of 2019," Scottish First Minister Nicola Sturgeon told reporters.

Sturgeon, who heads Scotland's pro-independence government, called for the vote after her attempts to seek a compromise over Brexit was met with a "hardline response" from Prime Minister Theresa May's government.

"The language of partnership has gone completely," she said of her talks with the British government.

During the last independence referendum in 2014, 55 percent of voters opposed Scotland breaking away from the UK, but support for Sturgeon's Scottish National Party (SNP) surged since the vote.

The results of last year's June 23 referendum divided the UK with Scotland voting to remain in the EU by 62 percent. It was outvoted by England which has a vastly larger population. In total, 52 percent of the UK population voted in favor of Brexit.

The possibility of an independence vote in Scotland adds a tumultuous twist to the Brexit process as Prime Minister May seeks to launch the two-year process of taking the UK out of the EU.

The British government must agree before a legally binding referendum can be held.

Ruth Davidson, the leader of Scotland's Conservative Party, pledged to vote against Sturgeon's request in a post on Twitter. Davidson said the First Minister has "chosen the path of division and uncertainty."

Sturgeon's announcement came as the British Parliament was on the verge of passing a Brexit bill that would allow May to trigger Article 50 to formally start negotiations with the EU in the next few days.

"In my view it is important that Scotland is able to exercise the right to choose our own future at a time when the options are clearer than they are now, but before it is too late to decide our own path," Sturgeon said on Monday.

A referendum would be "divisive," a spokesman for British Prime Minister Theresa May said on Monday.

"Only a little over two years ago people in Scotland voted decisively to remain part of our United Kingdom in a referendum which the Scottish Government defined as a 'once in a generation' vote," the spokesman said in a statement.

"The evidence clearly shows that a majority of people in Scotland do not want a second independence referendum. Another referendum would cause huge economic uncertainty at the worst possible time."