Scottish First Minister Nicola Sturgeon has agreed that if Scotland decides on a second independence referendum, it would be "common sense" to hold it in late 2018. The vote is part of a strategy to remain an EU member. 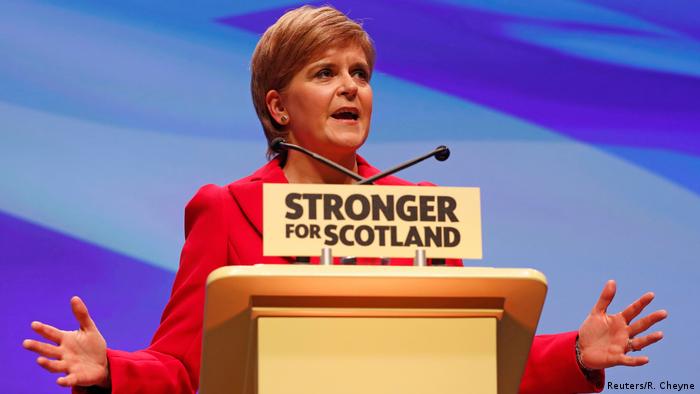 Although no decision has yet been made on whether to seek a new referendum to transform Scotland into an independent nation outside the UK, Scottish First Minister Nicola Sturgeon (SNP) has said it would be "common sense " for the poll to take place when the shape of the impending Brexit deal has become clear.

In a carefully worded answer to the BBC on Thursday, Sturgeon, who heads Edinburgh's pro-independence devolved government, implied she agreed with leading nationalists, including her predecessor, Alex Salmond, who believe the autumn of 2018 could prove the ideal time for a vote.

Asked about that proposed time scale, she said: "Within that window, of when the outline of a UK deal becomes clear and the UK exiting the EU, I think would be a common sense time for Scotland to have that choice, if that is the road we choose to go down."

Sturgeon, said she was not "bluffing" about holding another vote and was looking for ways to maintain Scotland's ties with the EU bloc. The plan of action - which is yet to provide an answer to which currency an independent Scotland would use - aims to strengthen Sturgeon's claim that Scotland should be allowed to remain a member of the EU.

Scottish voters rejected independence in a 2014 referendum with 55 percent of  voting to stay in the UK. However, Sturgeon says the Brexit vote changed the situation dramatically, after 62 percent of Scottish voters voted to remain in the EU. Overall 52 percent of the UK voted to leave the 28-member bloc.

The response from the Scottish leader confirms that the nationalists' strategy will be to hold the second independence referendum while the UK is still legally inside the EU.

Experts in Brusssels have warned, however, that securing Scotland's membership in the Union could still take up to four years.

According to Sturgeon's advisers, the SNP leader is ready to make a speech on her planned referendum within days of Article 50 of the Lisbon Treaty been triggered later this month. The UK's Supreme Court ruled in February that British Prime Minister Theresa May has no legal obligation to consult the devolved administrationsin Scotland, Wales and Northern Ireland to begin the UK's divorce proceedings with the EU.

The PM had been expected to take a formal letter to EU's spring summit in Brussels on Thursday, but she now looks likely to arrive empty-handed after legislative maneuvering in the House of Lords delayed her timetable.

Regardless of Sturgeon's plans for a second referendum, however, Scotland's devolved parliament must still return to Westminister to ask for the legal power to stage it - a request which is likely to provoke yet another dispute with May's Conservative government on the timing and phrasing of the poll.

"We've made it clear that there's no need for a second referendum," he later reiterated in an interview with BBC Scotland.