British Prime Minister Theresa May has told UK lawmakers that Article 50 will be triggered by the end of March. But there are dissenting voices in Scotland and Northern Ireland. 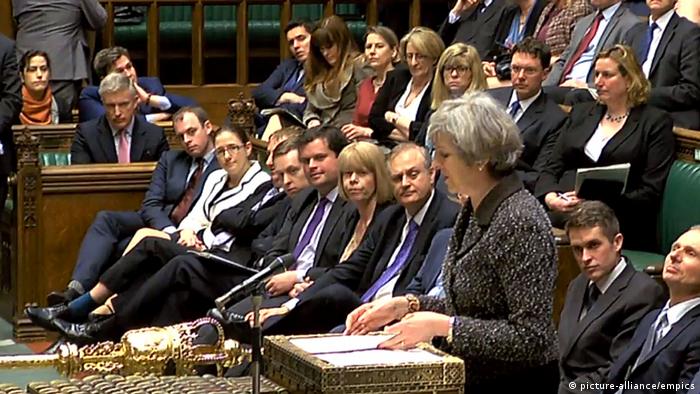 Prime Minister May briefly addressed the House of Commons on Tuesday to say the trigger to start exit proceedings from the EU would not be pulled this week. May has the parliamentary authority to send her letter to European Council President Donald Tusk but she is taking her time drafting its content.

"I will return to this house before the end of this month to notify when I have formally triggered Article 50 and begun the process through which the United Kingdom will leave the European Union," May told MPs.

"This will be a defining moment for our whole country," she added. "We will be a strong, self-governing global Britain with control once again over our borders and our laws."

In the following days, Queen Elizabeth would approve the bill, the Prime Minister added. After receiving this "Royal Assent," the cabinet would be free to send formal notification to the EU at any time.

The EU may be seen to have the upper hand in the negotiations. Without any agreement, the UK will leave the EU automatically in two years' time. European leaders could agree to extend the negotiation period but they may be reluctant to do so, with their attention focused on other issues such as European elections in 2019.

May cleared the last major hurdle to Brexit on Monday, when parliament rejected the amendments from the House of Lords and voted to approve the trigger to Article 50. On the same day, however, Scottish First Minister Nicola Sturgeon said she would discuss with the Westminster government another independence referendum.

During the last Scottish independence referendum in 2014, 55 percent of voters opposed Scotland breaking away from the UK. In the Brexit referendum last June, Scotland voted overwhelmingly to stay in the EU.

On Monday, May condemned Sturgeon's plan, saying that another vote would cause "uncertainty and division."

In another blow to the Westminster government, Northern Ireland's nationalist Sinn Fein party also called for an independence vote. Sinn Fein leader Michelle O'Neill told reporters in Belfast that "Brexit will be a disaster for the economy, and a disaster for the people of Ireland," urging a referendum as soon as possible.

O'Neill spoke shortly after Scotland's Sturgeon said she was to seek a second referendum on independence.

Theresa May said it was "not right to have a border poll at this stage" and that attention should remain on agreeing a power-sharing arrangement for the devolved government.

"We want to see that devolved administration being formed and that is what all the parties should be looking for at the moment," she told parliament.

Republican party Sinn Fein has been urging a referendum on Northern Ireland leaving the United Kingdom since the Brexit vote last year. Most Northern Ireland voters backed the remain-in-the-EU lobby.