Britain will not support an EU mission to cope with migrants crossing the Mediterranean Sea, according to the Foreign Office. The EU mission aims to fill a gap created as Italy scales back its national rescue operation. 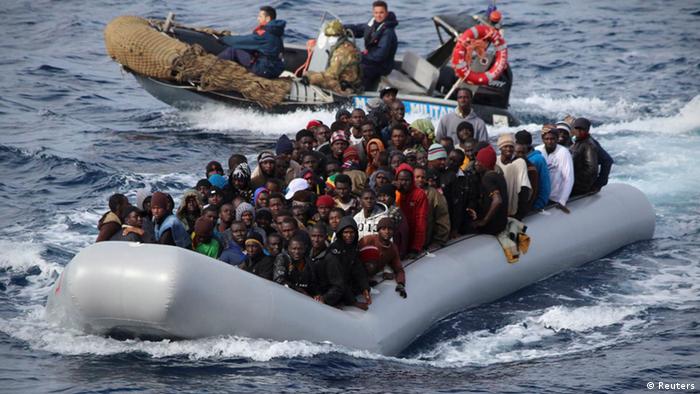 Laying out London's position, the British Foreign Office said on Tuesday that an EU rescue mission would simply encourage more migrants to attempt the dangerous journey across the Mediterranean Sea, which has claimed more than 3,000 lives so far this year.

"We do not support planned search and rescue operations in the Mediterranean," said Joyce Anelay, the Minister of State in Britain's Foreign Office.

She was responding to a question published on the House of Lords' website on October 15, according to The Guardian newspaper.

"We believe that they create an unintended 'pull factor,' encouraging more migrants to attempt the dangerous sea crossing and thereby leading to more tragic and unnecessary deaths," Anelay said.

According to London, the most effective way to protect migrants is to crack down on human smugglers and combat trafficking at its source in the origin and transit countries.

The EU plans to launch an operation called "Triton" in the Mediterranean Sea beginning this weekend. Struggling to cope with the influx of migrants from North Africa, Italy has been calling on Brussels to intervene for years. But the EU's 27 other member states have been slow to respond.

Last year, more than 350 migrants drowned when their boat sank off the coast of Italy. In response, Rome formed a national search-and-rescue operation called Mare Nostrum, which has been widely credited with saving more than 150,000 lives during the ensuing year.

But Italy is now planning to scale back the operation in the near future, saying that it's financially unsustainable. The operation costs nine million euros per month ($11.4 million).Triton has a budget of three million euros, with eight EU nations contributing planes and boats.

"Mare Nostrum is being wound up," said Italian Interior Minister Angelino Alfano. "There will be a formal decision during one of the next cabinet meetings."

Tragedies that take hundreds of migrants' lives still occur regularly in the Mediterranean Sea. In September, a migrant boat sank off the coast of Malta, leaving 500 feared dead. Two survivors said the boat was deliberately sunk by human traffickers after a dispute.

"Triton is a border operation and does not have a search-and-rescue mandate," said John Dalhuisen, Amnesty International's Europe and Central Asia Director. "It will only operate close to Italian waters and not beyond, where it is most needed."

More than 75 percent of the 4,077 migrant deaths this year occurred in the Mediterranean region, according to the International Organization for Migration (IOM). Since 2000, some 22,000 migrants have died trying to cross the Mediterranean Sea.

Half of those rescued this year were asylum seekers from Syria and Eritrea. Others came from Gambia, Ghana, Mali, Nigeria, the Palestinian territories and Somalia.