The House of Commons passed the Internal Market Bill by 340 votes to 256, threatening to violate its treaty with the EU. Brussels has threatened to sue Britain over the measures. 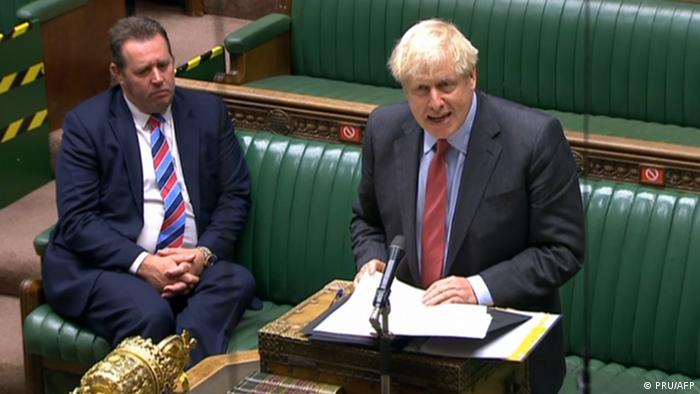 British lawmakers on Tuesday adopted a contentious bill giving ministers the power to breach its legally-binding divorce deal with the European Union.

The Internal Market Bill was approved in the House of Commons by 340 votes to 256, despite stiff resistance from the opposition and even some members of the ruling Conservative party.

This further soured relations with Brussels as the two sides entered a final week of negotiations to hammer out a post-Brexit trade deal.

The EU had said the bill is a serious violation of the Withdrawal Agreement, signed by British Prime Minister Boris Johnson in January.

It said the treaty is meant to guarantee a say for the bloc over future trade between Northern Ireland and EU-member Ireland.

The EU is concerned that the measures could lead to the re-imposition of a hard land border, which would violate the terms of the 1998 Good Friday Agreement.

The EU has threatened to take Britain to court if the offending clauses were not revoked by Wednesday. Ahead of the Commons vote, an EU spokesperson said that Brussels would respond "in the next few days."

The government also faced criticism from three former Conservative prime ministers. Johnson's predecessor, Theresa May, warned that said the bill would "lead to untold damage to the UK's reputation and put its future at risk."

But a rebellion in the House of Commons was defused by a concession to give Parliament, rather than ministers, the final say on triggering the treaty-breaking clauses of the bill.

Johnson said the bill was a "safety net" necessary to protect free trade between Northern Ireland and the rest of the country in case the talks on a border solution with the EU fail.

The bill will now go to the parliament's upper chamber, the House of Lords for debate where it will be reviewed until early December.

The government does not have a majority in the House of Lords and the revisions to the most contentious clauses are likely to have strong support.

British and EU negotiators have launched their final week of talks in Brussels before a summit on October 16, where EU leaders will decide whether a trade deal with London is still worth pursuing.

European Commission chief Ursula von der Leyen said on Monday that a deal was still possible, adding that a failure to unfreeze the talks would be bad for both Britain and the EU.