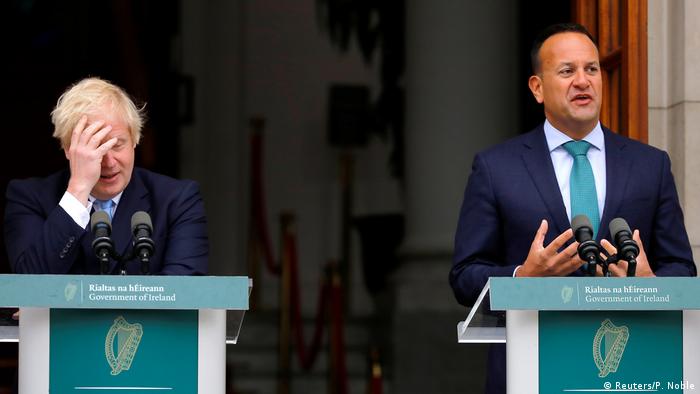 The vote on the draft bill comes amid ongoing rounds of trade talks between the UK and the EU.

"A country that values its sovereignty and values its independence and wants to be able to make trade agreements and treaties with other countries around the world [is] now sending out a message loud and clear that we're a country that maybe doesn't honor its treaties."

The ruling Conservative Party on September 9 unveiled a draft Brexit law to rewrite parts of its EU withdrawal deal. It would give the UK government the right to unilaterally change some of the arrangements made for the UK's only land border with the EU — between Northern Ireland, which is part of the United Kingdom, and the Republic of Ireland.

The announcement sparked controversy when Secretary of State for Northern Ireland Brandon Lewis, delivering the statement, said that the UK rewriting its EU divorce treaty "breaks international law in a very specific and limited way."

UK Prime Minister Boris Johnson has agreed to amend the controversial bill, following opposition from his own party.

The amendment means that lawmakers will now get a vote before Johnson could activate the powers that would break international law.

Lawmakers are set to vote on the bill on Tuesday, after it passed its first hurdle last week.

Despite the controversy over the bill, which also upset the EU, Varadkar told DW that he is remaining hopeful ahead of another round of trade talks between the EU and the UK.

"I think there'll be twists and turns. I think it is going to be a rocky road, but I have enormous confidence in our chief negotiator Michel Barnier to conclude these negotiations successfully, just like he did on the withdrawal agreement and the protocol before. "

A no-deal Brexit that would see the UK automatically fall back on World Trade Organization (WTO) rules could harm Ireland's economy, said Varadkar, adding that Ireland's future "lies in the European Union, in the single market."