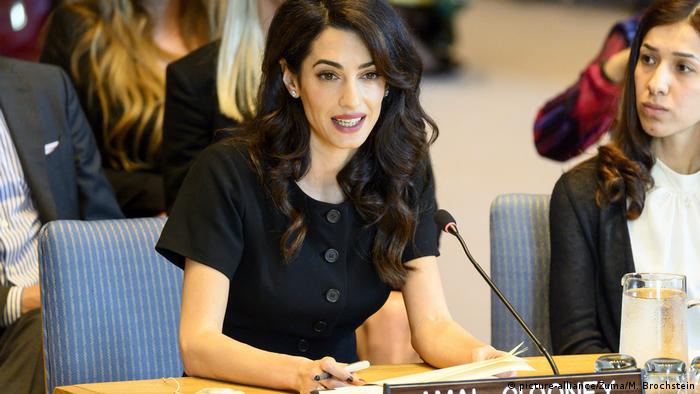 Amal Clooney on Friday quit as the UK's special envoy on press freedom, describing the government's plans to renege on parts of the Brexit withdrawal agreement as "lamentable."

In a letter to Foreign Secretary Dominic Raab, the high-profile human rights lawyer wrote of her disappointment that Prime Minister Boris Johnson planned to break the international treaty agreed with the European Union last year.

"It is lamentable for the UK to be speaking of its intention to violate an international treaty signed by the Prime Minister less than a year ago," said Clooney.

"It threatens to embolden autocratic regimes that violate international law with devastating consequences all over the world," she wrote.

The British-Lebanese barrister was appointed to the voluntary role in April last year following an alarming rise in violence against journalists globally and laws in some autocratic countries that limit them from doing their job.

Clooney is not the first high profile figure to criticize the government's Brexit U-turn. On Sunday, former British Prime Ministers Tony Blair and John Major published a joint op-ed in The Sunday Times, describing the proposals as "shocking."

US Democratic presidential candidate Joe Biden has also warned London that there'll be no UK-US trade deal if he is elected, if the new law doesn't respect the integrity of Northern Ireland's 1998 peace agreement.

Johnson is pressing ahead with the UK Internal Market Bill on trade despite a warning from Brussels that it could wreck their future relationship.

The legislation is aimed at ensuring Britain's four nations — especially Northern Ireland — can trade freely with one another after leaving the European Union, but the government says that requires creating powers to override part of the withdrawal treaty it signed with Brussels.

Read more: UK seeks to calm US fears over Brexit and Northern Ireland

The bill passed its first stage in the lower House of Commons by 340 votes to 263 on Monday, and looks set to clear further stages next week after Johnson moved to avert a rebellion within his ruling Conservative party by offering concessions.

Firstly, he promised parliament a vote on any decision to use the treaty-breaking powers created by the bill. Secondly, he also committed to referring any dispute with the EU to the resolution mechanism set out in the Withdrawal Agreement "in parallel" to using the treaty-busting powers unilaterally.

The EU says any breach of the Brexit treaty could sink trade talks and propel the UK towards a messy exit on December 31 when it is scheduled to fully depart.

Tony Blair and John Major have written a joint letter urging lawmakers to reject a "shocking" plan. They said the plan imperils peace in Northern Ireland and tarnishes the UK's reputation.