After a decade of austerity and 12 months of pandemic and economic slowdown, the numbers of food banks and food bank users in the UK is rising sharply. And those users include working families 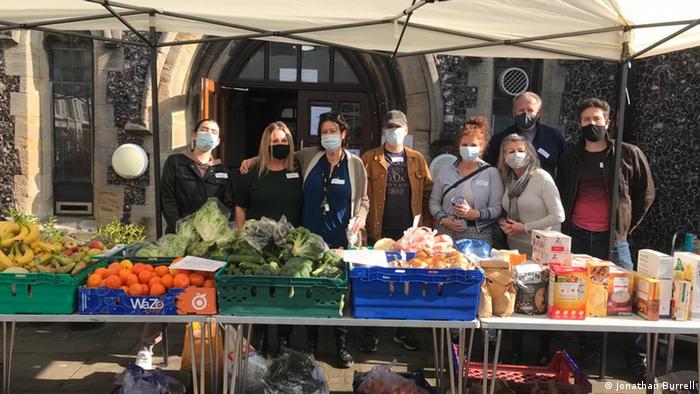 More people than ever in the United Kingdom are suffering from food poverty, with even working families turning to charities for help, aid agencies say.

In a damning statistic issued in December 2019, fact-checker FullFact said there were more food banks in the UK than outlets of the fast-food chain McDonald’s.

"It is true that there are now more food banks in the UK than there are McDonald’s," Liam Evans of food aid provider turn2us told DW. He says there are at least 2,000 food banks and around 1,300 McDonald's branches across the UK.

Food charity Sustain UK says 8.4 million people in the UK live in food poverty and that aid has increased sharply during the pandemic. The Trussell Trust, the UK's biggest food bank network, gave out nearly 50% more food parcels in the first half of 2020 as compared with the same period a year earlier.

The YouGov poll, commissioned by Kelloggäs, surveyed 1,100 primary and secondary school teachers from across the UK in February and found that one in five UK schools has set up a food bank since the start of the pandemic to support local families

According to the Food Foundation think tank, food insecurity has risen most among poorer families with school-age children during the pandemic. Some 40% of people with children on free school meals experienced food insecurity over the last six months, compared with 12% of all households with children. Jonathan Burrell is the manager of a community center in Hove, southern England, that decided to set up a food bank

Food banks are even being organized by institutions that normally provide other community services.

"As manager of a lively community center in Hove, my role is usually to provide and administer facilities for around 60 weekly groups, providing social, educational and leisure opportunities," Jonathan Burrell told DW.

"With the limitations of lockdown restricting the classes we can currently provide to our preschool and a small number of support groups, our community center has taken the opportunity to meet a different role and provide a weekly food bank. Having noticed that there was no food bank in our local area, we obtained a grant from the local council and initiated the project."

Burrell says the response from the local community has been absolutely overwhelming. "Approximately 80 to 100 people attend each week to collect much-needed supplies, many more than we anticipated," he noted.

"The rise of food banks over the last few years is a symptom of a decade of austerity, benefit freezes and cuts to social programs, but also long term problems such as house prices, low wages and rising living costs," Evans warned.

"No government would be proud to see the need for food banks soar, and many may argue that too many administrations have been focused on other things — like Brexit, COVID and national debt — and not prioritized poverty,"

"Hopefully once we have overcome COVID, the government will turn its focus on its leveling-up agenda which in turn must focus on living standards for those of us on low incomes," Evans from turn2us said.

"This doesn't just mean spending money on infrastructure in left-behind areas; it must also mean investing in our social security system, ending the five-week wait for Universal Credit and building more social housing."

However, if government inaction over a review into the drivers of food insecurity is anything to go by, things may well stay the same. The review has been "paused," Will Quince, the minister for welfare delivery, told the Lords Economic Affairs Committee.

The study was halted as the Department for Work and Pensions (DWP) said resources were being diverted due to the pandemic.

Spain's food banks pick up where the pandemic left off

"The most surprising aspect is that many of those requiring support are using food banks for the first time in their lives, including some who were previously in well-paid jobs," Burrell emphasized. Examples are taxi drivers, yoga teachers and dental nurses, all of whom have seen their incomes plummet over the past year, he says.

"It has also been concerning to see the number of families with young children who have required our services. Around 60 of those attending weekly are in family units, often with very young children and a sense of hopelessness," Burrell said, adding that a lot people claimed that they were collecting supplies for a friend or relative, when it was clearly for themselves.

"Definitely many of our clients have found it extremely difficult to admit that they require help from our food bank," Burrell said. "Often they take a great deal of persuasion that they are eligible for the service, either because they are still in work or own their own home or have never had to claim benefits in the past."

Food banks are a lifeline for Mexico's needy, and never more than during the current COVID-19 pandemic. But with a recession looming, they are at risk of losing donations, as Sandra Weiss reports from Puebla, Mexico.