Outcry over COVID-19 food parcels for UK children prompts U-turn | Europe | News and current affairs from around the continent | DW | 13.01.2021 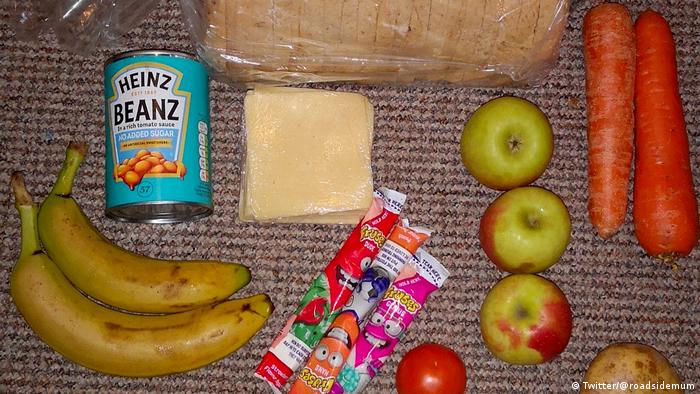 Mizz, a single mother from Stoke-on-Trent, said her heart sank when she opened the food package from the British government.

"We were gobsmacked," Mizz, who didn't want to give her full name, told DW. "I grew up poor, and I know poor. I can make a meal out of thin air — but not with this," the 41-year-old said. Mizz said her parcel was meant to provide lunch for her 12-year-old for 10 days: one loaf of bread, half a cucumber, one pepper, a few potatoes, a block of cheese, a pack of butter, four pieces of fruit, a chocolate bar and some salty snacks. 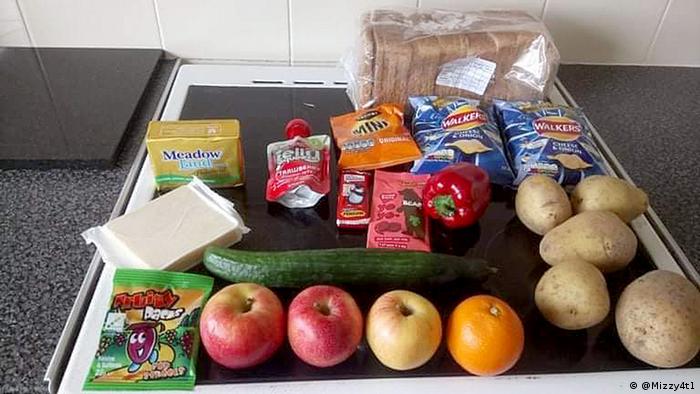 This parcel was meant to be a week's supply of food.

Mizz has no broadband, no computer and no smartphone, so homeschooling her son during the UK's national lockdown is already tough. But without a nutritious meal, Mizz said, her child is struggling to concentrate or learn at all at secondary school.

"I'm not ungrateful... but this makes you feel like less than nothing," she said.

Food parcels to keep kids from going hungry during lockdown

Mizz took to Twitter to join other parents posting photographs of the packages they'd received. The images sparked widespread outrage in Britain, one of the world's richest countries, and prompted the government to reverse course Wednesday.

The food parcels, destined for children eligible for free school meals in England, replaced food vouchers of £15 (€16.80/$20.50) per week per child offered to parents while schools remain closed due to COVID-19 restrictions.

The firm behind many of the meal parcels, Chartwells, has issued a formal apology and agreed to refund schools for parcels that "have not met [their] high standards." The company was contracted by the UK government to deliver lockdown lunch hampers to many of the 1.4 million kids in England whose families meet income requirements.

An 'insult' to children and parents’ dignity

Max Davie of the Royal College of Paediatrics and Child Health warned that the food shown in the images was "not nutritionally sufficient for children and young people." In a statement Tuesday, he called the packages "an insult to the dignity of people who rely on this support."

Calling for urgent action, the footballer and campaigner Marcus Rashford, who received free school meals as a child, tweeted: "children deserve better than this."

Addressing Parliament Wednesday, UK Prime Minister Boris Johnson vowed that his government would do everything it could "to ensure no child goes hungry" and said parents would have "the choice to give kids the food they need" under the reinstated voucher scheme.

In 2020, Johnson and fellow Conservative MPs voted down similar plans to offer food vouchers for parents during school holidays, only to reverse the decision days later.

Reacting to news of the government's change of tack on Wednesday, campaigner and cook Jack Monroe tweeted "We did it!!! THANKYOU!!!!"

But Labour Party leader Keir Starmer said it "shouldn't have taken social media to shame the prime minister into action" during Prime Ministers' Questions at the UK Parliament. 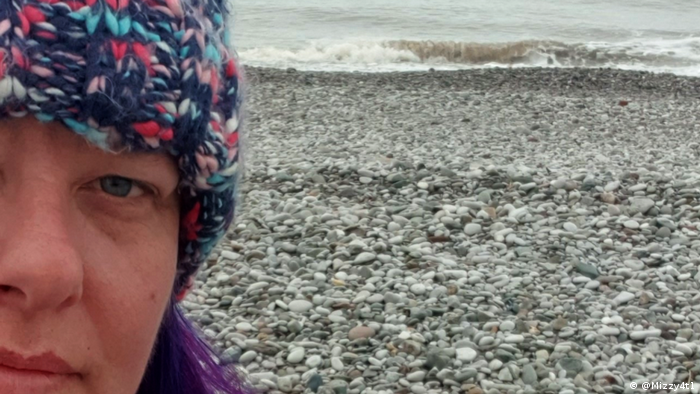 Mizz, a mother from Stoke-on-Trent in the UK, spoke to DW about the food parcel she received

Punished for being poor

The return of the voucher scheme offers welcome relief for Mizz, but it won't be enough to keep her family from going hungry. "We're not living," she said. "We're just existing."

Mizz mostly survives on the £62 a week that she' receives in government benefits. A bouncer by trade, she's been unable to work since March 2020 with bars shuttered by COVID-19 regulations. Since then, she says she has applied for 138 jobs with no success and has even sold her television in a bid to get by.

Britain's wealth and income gaps have expanded in recent years. The share of British children at risk of poverty or social exclusion in the UK is significantly higher than the EU average and experts warn the COVID-19 pandemic will only exacerbate existing inequities.

This is something Mizz has experienced firsthand. "It feels like I'm failing my kids," she said, close to tears. "I don't want them to grow up thinking this is normal."

Mizz is hoping for a better 2021, but she's hesitant to be too optimistic. "We're the minions right at the bottom of the ladder," she said. "It feels like we're being punished for being poor."