British finance chief Philip Hammond has backed away from a statement that risked inflaming Brexit talks. He has been criticized for his handling of financial provisions amid ongoing wrangling over the UK's divorce bill. 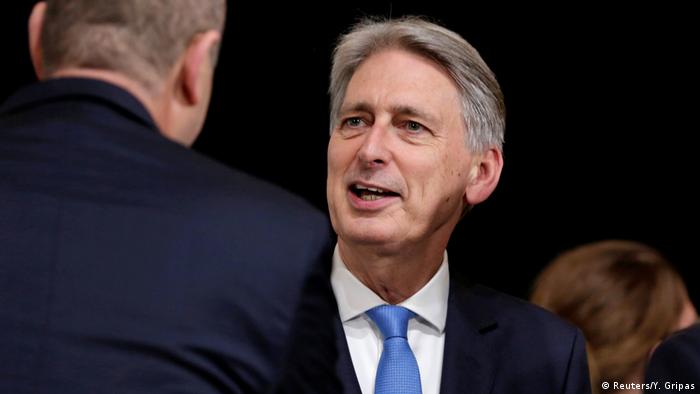 Philip Hammond apologized on Friday for his "poor choice of words" in an interview with Sky News earlier the same day, in which he referred to the European Union as "the enemy" in Brexit negotiations.

Hammond tweeted from the sidelines of a meeting of the International Monetary Fund in Washington that he had been "making the point that we are united at home" in the televised interview. He also recast the EU as "friends and partners" and reiterated Britain's intent to achieve an exit deal from the European bloc that would benefit both sides.

When speaking on Sky News earlier Friday, Hammond alluded to division within the UK over the shape that the country's final departure should take.

"I understand that passions are high, I understand that people have very strong views about this, but we are all going to the same place, we all have the same agenda," the finance minister said. "The enemy, the opponents, are out there, they're on the other side of the negotiating table. Those are the people we have to negotiate with, negotiate hard to get the very best deal for Britain."

The Conservative Party under Prime Minister Theresa May has been battling internal disagreement over Brexit negotiations. Hammond, in particular, has been criticized for his doomsday prophecies about Brexit's effect on the UK economy. Earlier this week, the minister told parliamentarians in Westminster that the uncertainty surrounding the ongoing exit negotiations between the UK and the EU was "acting as a dampener" on the British economy. 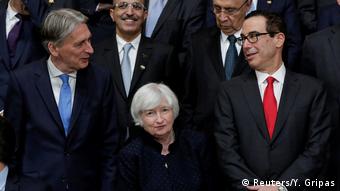 Tory members have also upbraided Hammond for failing to set aside government money now for the possibility that the UK may crash out of the EU without a deal.

Nigel Lawson, a Tory finance minister under Margaret Thatcher in the 1980s, described Hammond's actions as "very close to sabotage" during a BBC interview earlier this week.

In the run-up to the June 2016 Brexit referendum, Hammond campaigned for Britain to remain in the EU. In his Sky News interview, Hammond declined to say whether he would vote to leave if there were to be a second referendum.

Pro-Brexit British newspapers have called for May to sack Hammond. However, on Thursday a spokesperson from the prime minister's office said the finance minister had May's full support.

Hammond's Sky interview and subsequent backtrack from his aggressive wording come as the UK and the EU have reached a standstill, with each side saying the responsibility for the deadlock lies with the other.

Read more: Brexit Diaries 13: Whose ball is it anyway? 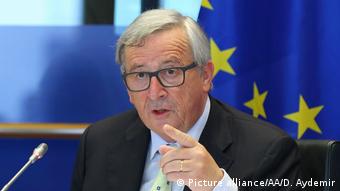 Before Hammond's statements, European Commission President Jean-Claude Juncker said the holdup in negotiations was due to the UK attempting to shirk its financial commitment made when it was a member of the 28-nation bloc.

"They have to pay," Juncker said of the UK while in his homeland, Luxembourg. "If you are sitting in a bar and if you are ordering 28 beers and then suddenly one of your colleagues is leaving and is not paying — that's not feasible."

The EU estimates that the UK could owe the bloc between €60 to €100 billion ($70 to $120 billion) for the divorce. However, Britain maintains that it only needs to pay a fraction.

EU and UK leaders will be in Brussels next week for the next round of talks. Prime Minister May has indicated she might provide further clarification on Britain's willingness to honor its financial commitments, while EU negotiators have said they will offer the departing nation a goodwill gesture.