Not even the "EU Super Girl" was enough to keep Brexit talks in Brussels from stalling over lack of progress on the UK's divorce bill. She ended up getting tossed out of a press conference. 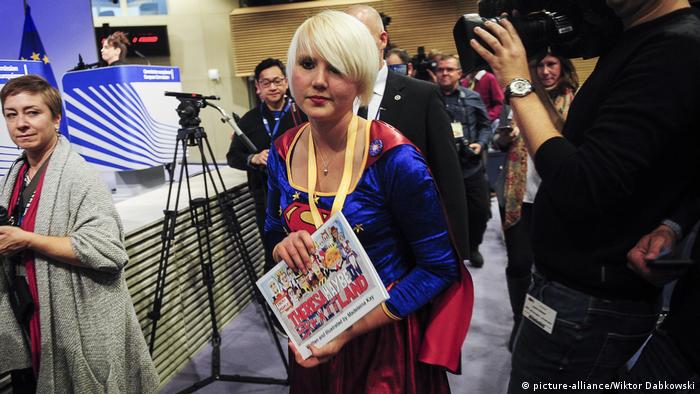 Madeleina Kay, who was ejected from the Brussels press conference, has campaigned against Brexit through art, music and social media

Following four days of talks between EU and British negotiators, the two sides are in a "state of deadlock" after the UK failed to provide specifics on the so-called Brexit bill, Brussels' chief negotiator Michel Barnier said on Thursday at a joint press conference with his British counterpart.

EU officials have estimated the UK's financial commitments to the bloc's programs at up to €100 billion euros ($118.5 billion), while British media have reported that London will likely cap the amount at €40 billion ($47.50 billion), a figure Brussels is unlikely to accept.

'No negotiations' on divorce bill

Although British Prime Minister Theresa May said the UK would ensure that the EU does not lose out financially from Brexit during a September speech in Florence, Barnier said London has yet to specify elements of its divorce settlement.

Read more: What does the German election mean for Brexit?

"This week, however, the UK repeated that it was still not ready to spell out these commitments – therefore there have been no negotiations on this subject," Barnier said. "On this basis, I'm not able, in the current circumstances, to propose next week to the European Council that we should start discussions on a future relationship."

'Tiger in the tank'

Brussels has made clear on several occasions that it would not move forward with post-Brexit talks until there is "sufficient progress" on three key issues, including EU citizens' rights, the questions of the Irish border and a financial settlement.

But British Brexit Minister David Davis said Thursday that while more work needs to be done, he was confident an agreement on EU citizens' rights could be made in the near future. Davis has pushed for EU leaders to give Barnier the "means to explore ways" on their future relationship.

"We think that we have made some very helpful suggestions to get the great ship moving down the slipway and onto the open seas, that's what we all want to see," Johnson told reporters in London."

"We see no reason why that should not take place. We're looking for some urgency from our friends and partners, and it's time to put a bit of a tiger in the tank and get this thing done."

During the press conference on Brexit negotiations, security removed British singer and anti-Brexit activist Madeleina Kay, who sat front row in an "EU Super Girl" costume. "I had every right to be there," Kay wrote in a tweet. "I had a pass and badges. They were just scared of a fancy dress costume."

"I think Britain needs saving from Brexit because it's going to be an unmitigated disaster," Kay told DW. "I'm here to represent that there is a 'Remain' campaign, and that we don't accept what Davis is doing and the government's policy on Brexit."

The UK is the first country to launch proceedings to leave the EU after a majority of British citizens voted in favor of a formal divorce from the bloc. 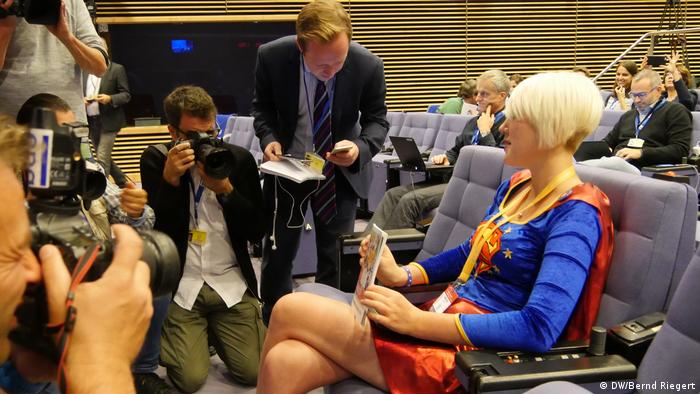 Madeleina Kay advocates for the British government to drop Brexit and remain in the EU. She told DW that the UK's departure from the bloc will be an "unmitigated disaster."