U21 Euros: Germany claim title as underdog side beats Portugal in the final

Germany's under-21s sealed the European Championship title with a 1-0 win over Portugal. Their unlikely run to the final was powered by a feel-good factor in the squad. 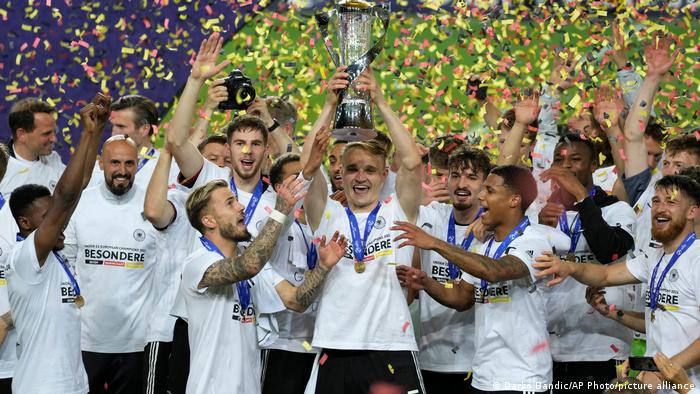 Lukas Nmecha, on loan at Anderlecht from Manchester City, scored the only goal of the game, coolly rounding the goalkeeper and slotting home following a pinpoint pass from Wolfsburg's Ridle Baku.

In the first half, Bayer Leverkusen's Florian Wirtz, who had capped off a wonderful move in the semifinal against the Netherlands, had hit the bar with a deflected effort, and it was Germany who created the better chances throughout, although Portugal enjoyed more possession.

But Niklas Dorsch in central midfield and Nico Schlotterbeck in defense proved to be impassable obstructions for the Portuguese.

It was a mature first-half performance from Germany, who repeatedly used tactical fouls to foil Portuguese counterattacks. Chances on either side could not be converted until after the break, when Nmecha grabbed his fourth goal of the tournament, making him top scorer. 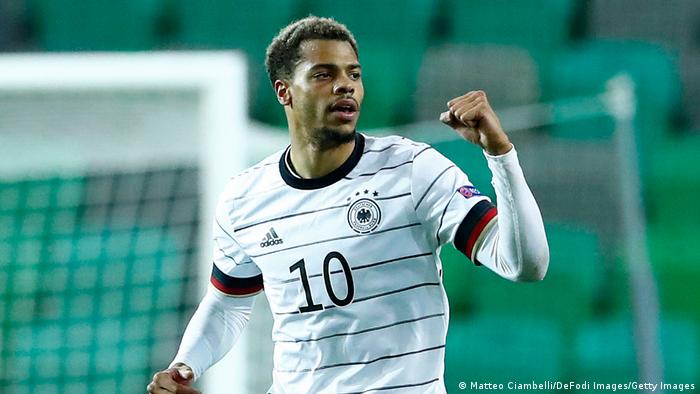 It wasn't even his first match-winning goal against Portugal in a European Championships final. In 2017, Nmecha was still playing for England when he scored to seal a 2-1 final victory at under-19 level.

Born in Hamburg to a German mother and a Nigerian father, Nmecha grew up in England and played for the Three Lions' youth teams from under-16 to under-21 level. He only changed allegiances in 2019.

A late flurry of chances came from substitute Karim Adeyemi, while Portugal battled on but looked the less confident side.

"I'm full of joy and pride for this team," said coach Kuntz after the match. "This was the group that people had the least faith in. I was rather pessimistic but as we can see, things have gone rather well."

In the absence of big stars and with a coach criticized before the Euros, Germany won the final as underdogs, who were never fancied to go this far.

There was plenty of doom and gloom following Germany's 4-1 defeat to Belgium in qualification for this tournament in September 2020. Kuntz himself admitted "we knew that there may be a few weaker age groups coming along. It was clear that we wouldn't be a Euros title favourite with this group."

Harsh words from the coach, who ahead of the tournament had set for his side the rather conservative goal of making it out of the group stage.

While countries like Portugal fielded sides stacked with players from top domestic clubs, the Germany squad did not feature any players from Bayern Munich, RB Leipzig, or Borussia Dortmund. The most represented side? Next season's Bundesliga newboys Greuther Fürth, with three players.

In the absence of star power, the team had instead developed true chemistry over the past two years. And coach Kuntz's management playing a key role.

Even though he is Germany’s most successful under-21s coach ever, Kuntz has been criticized for poor results in the past years. His comments regarding the lack of quality in this class of players are further underlined by the fact that he went through 70 players in the two-year run up to this tournament. 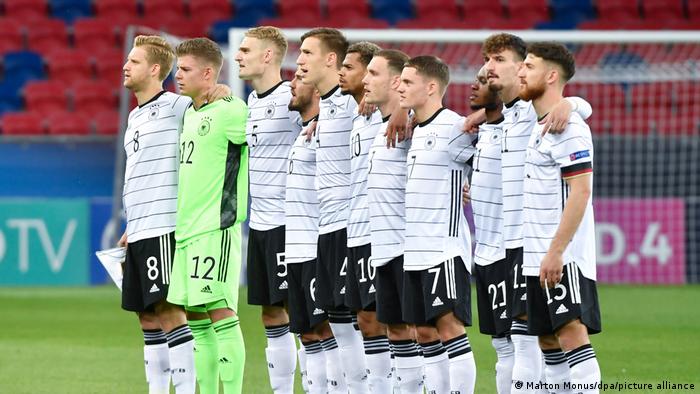 Despite such a glut of personnel to process, Kuntz has been praised for his close relationship with players. In the pre-match press conference, Red Bull Salzburg's Mergim Berisha lauded him with praise, saying: "Every player has his trust. He's a very tactically astute coach, can motivate us, and breathes fire into the team. He wants us to give everything for each other. I think that's why we're so successful."

Going out on top

Once Hansi Flick became available, that notion was nipped in the bud and Kuntz admitted to feeling frustrated about how the situation was handled. He said Germany’s team manager Oliver Bierhoff had not even told him he was out of the running.

There is plenty of speculation he may call it a day after the upcoming Tokyo Olympics. And he could even be in for a surprise promotion to fill the vacant position of DFB president. Among players and functionaries, the 58-year-old would certainly be a popular candidate capable of breathing new life into the role. 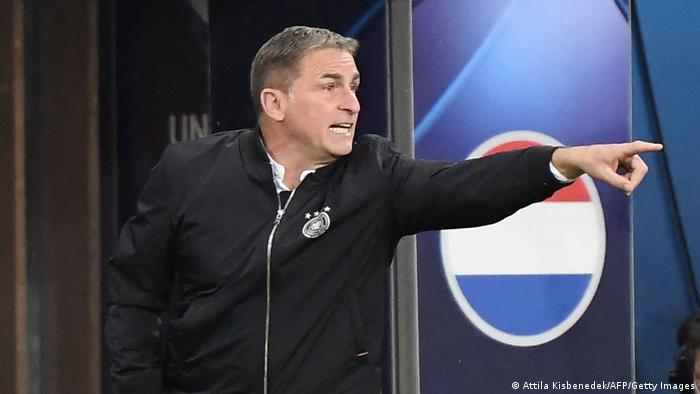 Transitioning to the senior side

One criticism aimed at Germany's otherwise successful youth setup has been the difficult transition from the under-21s to the senior side.

Of the Germany under-21s side — which won Euro 2017 — just one player has made the squad for this year's senior tournament. Serge Gnabry is the sole representative from that group, although many other players have established themselves at sides across Europe's top five leagues.

The under-21s' 2009 triumph yielded a golden generation including Manuel Neuer, Jerome Boateng, Mats Hummels and Sami Khedira, who all went on to feature in Germany's 2014 World Cup triumph. This group will likely not repeat that trick.

A future featuring for Flick

Germany can hope for more synergy between the senior and under-21s side in the future. After all, it was Hansi Flick who hired Kuntz in 2016, when he was still Germany’s sporting director.

However, most of this squad may struggle to find a future in the senior side. While Ridle Baku and Florian Wirtz have already earned full caps, many among the ranks are late bloomers.

Nmecha and midfield maestro Dorsch, who have both impressed in the Belgian top division, have firm cases to feature in the future — but this side will be remembered for its collective effort.

For now, the feel-good factor will be the standout star of this title tilt. Perhaps Germany’s senior team will draw inspiration as they kick off their postponed Euro 2020 campaign against France on June 15 in Munich.

Joachim Löw will step down as head coach of the German national team in July after almost 15 years in charge. But who's next? From Jürgen Klopp to Hansi Flick to Stefan Kuntz, DW takes a look at the possible candidates.