The men were being driven home after picking tomatoes when their van crashed into an oncoming truck. The second such crash in two days, it highlights the precarious working conditions foreign laborers face in Italy. 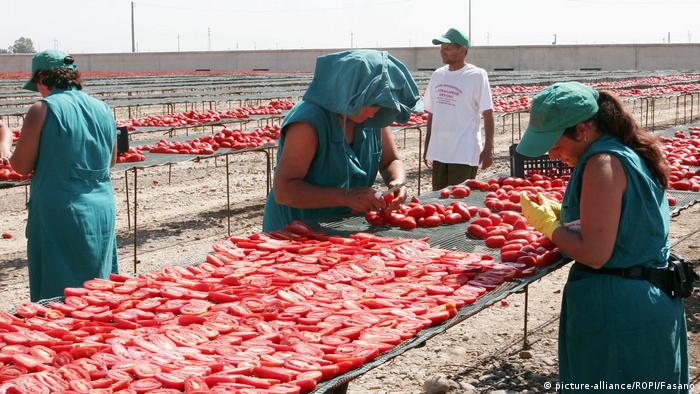 A van transporting African migrant workers crashed into an oncoming truck hauling tomatoes on Monday, killing 12 workers. Two men in the front of the van as well as the truck driver were all injured, though not critically. On Saturday, a similar crash occurred in the same area, killing four and injuring four.

The incidents took place near Foggia, in southern Italy's Apulia region — an area renowned for its agricultural industry. Those killed in both crashes were migrant day laborers from Africa who had spent the day picking tomatoes. Tens of thousands of foreign laborers are employed in anti-immigrant Italy's agricultural sector and Apulia's tomatoes are exported around the world. Though some migrant workers come from Poland, Bulgaria and Rumania, most are from Africa.

The workers often earn no more than a few euros a day for their work and live in squalid conditions. Local producers turn to middlemen, known as Caporali, or gangmasters, who are responsible for getting the workers to and from the fields and supervising their work. The middlemen — often members of organized-crime syndicates — decide who works, and pocket a percentage of the migrants' wages. The workers are also charged for transport, food and housing.

As they have no regular contracts, the workers are entirely at the mercy of the Caporali for survival in what many, such as Flavio Di Giacomo of the Italian branch of the International Organization for Migration (IOM), call an exploitative slave system. Di Giacomo decried the situation as such in a tweet Monday.

For years, the IOM and labor unions have been calling for a system of public transportation to avoid crashes like those on Saturday and Monday but to no avail.

On Sunday, African migrant workers announced they would strike on Wednesday. World Federation of Trade Unions (USB) Representative Aboubakar Soumahoro said: "At dawn the workers will march from the countryside to Foggia in order to claim dignified working conditions."

Italian Deputy Prime Minister Luigi Di Maio offered his condolences to the victims of Monday's crash. Di Maio is the leader of the populist Five Star Movement (M5S), which governs with the staunchly anti-immigrant Lega (League) party of Matteo Salvini.