Migrants put mafia mobsters behind bars in Palermo | Europe| News and current affairs from around the continent | DW | 13.06.2018

Eleven shop owners who bravely took on their racketeers show that the southern Italian city's multiculturalism has had an impact on breaking down the traditional mafia methods. Ylenia Gostoli reports from Palermo. 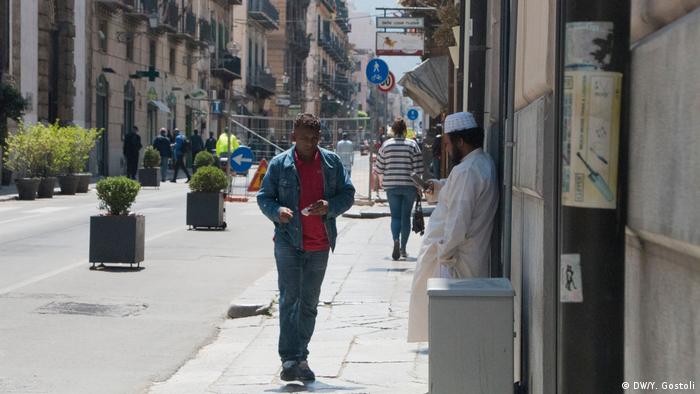 There was a time when the door to Ruben's store had to stay permanently shut, even during opening hours.

Originally from Bangladesh, in 2002 he opened a money-wiring store on Maqueda street, one of the main arteries in Palermo's city's historic center and one of its most diverse. Amid crumbling facades and historical palaces tourists stop to admire, in this stretch of the road the omnipresent souvenirs are sold alongside Asian saris and North African spices.

It is here that 11 shop owners, 10 Bangladeshi and one Tunisian, decided to challenge a system of street crime and extortion against them and other local merchants by a local mafia group by breaking the silence on what was happening.

Assisted by a local anti-racket grassroots group, Addio Pizzo(goodbye extortion), the shop owners reported those responsible to the police. This led to the arrest of nine people in May 2016, who now face charges including extortion, robbery, arson and assault, aggravated by mafia methods and racism.

Ruben says that since the arrests, he no longer has to ask his customers to ring a doorbell in order to be let in.

"There used to be many armed robberies on this street, or attempted robberies," Ruben recounts of the time when Emanuele Rubino, also known as the "wolf of Ballaro," and his gang terrorized the neighborhood of the same name. 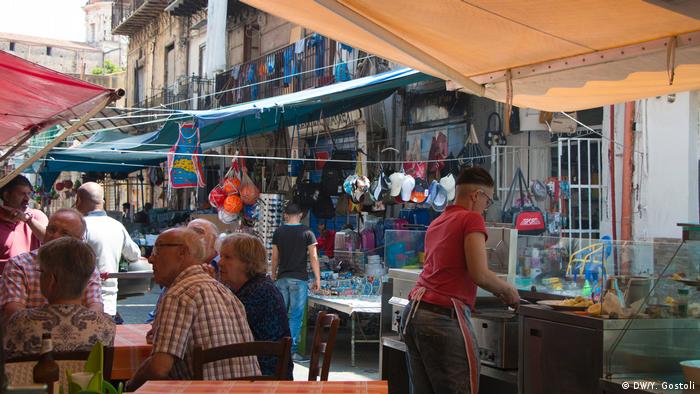 "They tried to get money in any way they could," Ruben told DW, "they asked for money. Sometimes I had to pay them to stay open." The racketeers usually demanded between €40 to €50 ($47-$58) a week in "protection money," or pizzo, as it's called here, as a way to assert power and control.

For Ruben, the situation deteriorated in 2015.

"I started keeping the door closed after they attempted an armed robbery. They tried to come into my store many times," he said as customers wandered into the semi-dark store, whose only source of daylight is the door that is now kept wide open.

"If I looked at them the wrong way, I could be hit. They were always here, from day to night, a group of eight to 10 people. But for two years now, we have been living like in Europe, it's not Sicily," Ruben joked.

The turning point came in April 2016, when a young Gambian man, Yusupha Susso, was shot in the head by Rubino after an altercation. Susso miraculously survived the shooting in broad daylight, which sparked outrage and led to the police crackdown.

Rubino was sentenced to 12 years for the shooting. Five of his associates were freed in relation to the extortion charges, while one is under house arrest. The trial is expected to conclude later this year.

Multiculturalism and the mafia

"It's the first time that such a large group of merchants of foreign origin collectively decides to file charges," said Daniele Marannano, one of the coordinators at Addio Pizzo, which is supported by a network of volunteers and charitable tax donations. "We have always encouraged collective efforts to report, because more people means fewer risks."

The winding streets of the neighborhood of Ballaro, opening up into dilapidated small squares and a street market permeated with the sweet and sour smell of fried fish and raw meat hanging from hooks, have historically been a stronghold of Cosa Nostra, the Sicilian mafia. But dynamics have shifted in the past decades.

"Today, the top-down dimension of Cosa Nostra has collapsed," said Leoluca Orlando, the mayor of Palermo, referring to the traditional system according to which bosses would delegate control of a specific territory down to the neighborhood level. 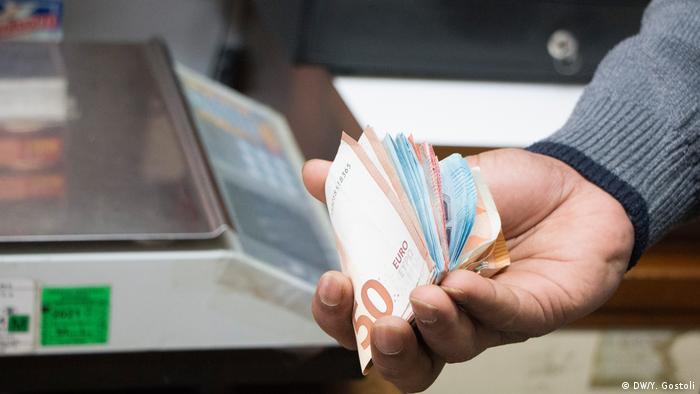 "I used to try to keep as little money as possible in the cash desk. Now, I can keep the money in my pockets without fear," said one shopowner

"With the blows the mafia have received in the past years, relations have become more horizontal. Which doesn't exclude the possibility of links with the top, but this has been weakened," Orlando told DW.

A report published in 2013 by the Transcrime research center calculated that the Sicilian mafia rakes in half of what the Camorra, the Neapolitan mafia, earns from its illegal activities. New and powerful organizations, such as the Nigerian Black Axe, have emerged in recent years. Fourteen members of the Nigerian mob were convicted of mafia association among other crimes last month, marking the first time such a crime was attributed to a foreign organization by an Italian court.

"I used to try to keep as little money as possible in the cash desk. Now, I can keep the money in my pockets without fear," said Faysal, who preferred to use a pseudonym, taking a bunch of banknotes from his pocket. He's another of the 11 merchants who pressed charges against the Rubino gang, and runs a supermarket down the road from Ruben.

While a lot of the stores around Maqueda street are owned by migrants that settled in Italy years ago, some of the victims were born in Palermo. But none of them came forward.

"Their choice of the foreign shop owners was also a kind of reprimand to the many business owners from Palermo who continue, till today, to pay," Marannano told DW from his office in a building confiscated from the mafia in the city center. His organization has assisted 300 victims of extortion in the city and nearby villages.

One of the challenges the organization faced when it started in 2004 was to get people to talk about extortion, to break the taboo.

"Today, we live in an environment where it's easier to report. But those who do are still too few considering how widespread the phenomenon is," said Marannano.

"The point of that is to create a protection network, to make sure that those who report are not left alone," Marannano said. "Police action may be important, but until we make a real cultural shift, the phenomenon is destined to cyclically regenerate itself. As long as there is a business owner willing to pay, there will be someone ready to collect."

Italian authorities have seized more than 1 billion euros from five siblings who allegedly used Mafia connections to expand their business. The group had previously testified against another Cosa Nostra family. (08.07.2015)

Speaking in Ostia, a suburb of Rome, Francis urged residents to stop the silence that has terrorized the community. The town is home to the infamous Spada crime family. (03.06.2018)