Labor exploitation common in the EU | Business| Economy and finance news from a German perspective | DW | 02.06.2015

Labor exploitation common in the EU

Labor exploitation is a serious problem in the European Union, a fresh report by a prominent rights group has shown. Abuses across the bloc do not only affect migrants from outside the area, but also EU citizens. 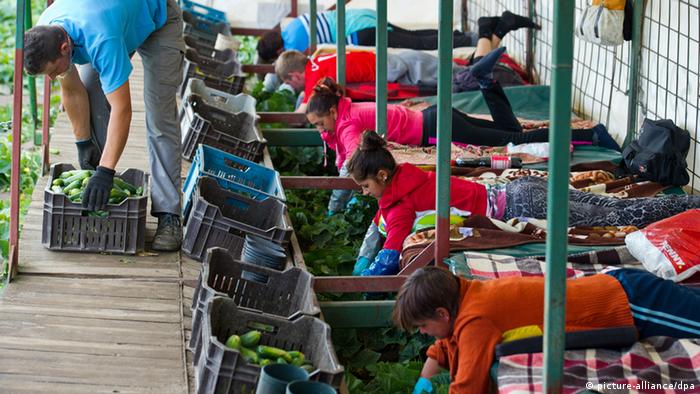 Employment abuses were widespread across the 28-member European Union, a report by the EU's Fundamental Rights Agency (FRA) found Tuesday. It said labor exploitation occurred although the right to fair and just working conditions was enshrined in EU law.

"Labor exploitation is a reality in the EU," FRA spokesperson Bianca Tapia said, adding that in some sectors of the economy it was becoming endemic.

The FRA said one in five inspectors dealing with the issue came across severe cases of exploitation at least twice a week.

The Vienna-based rights group compiled over 200 case studies, highlighting, among other things, the plight of Lithuanians working on British farms and living in sheds with little access to hygiene facilities, or Bulgarians harvesting fruits and vegetables in France for 15 hours a day, but being paid for just five of the 22 weeks they worked.

The FRA noted the worst affected sectors included the building industry, hotel and food services and manufacturing businesses, pointing out that not only migrants from outside the bloc, but also EU citizens were affected by abuses.

It said the problem was compounded by a patchwork of national labor laws across the EU and differing inspection standards, with lax sentencing in some countries.