Turkish Prime Minister Recep Tayyip Erdogan is touring the Mideast in a bid to secure new relationships with recently liberated states in North Africa and to gain support for his hard line against former ally Israel. 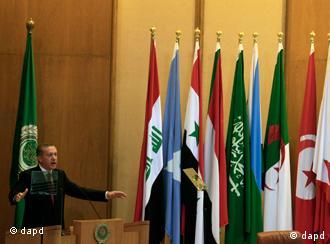 Erdogan has become a popular hero to many Arabs

As Recep Tayyip Erdogan steps up to the podium at the Arab League in Cairo, one could mistake the conservative Turkish premier for a revolutionary firebrand. He calls for "more freedom, democracy and human rights" while condemning dictatorships that suppress the demands of the people.

Erdogan prefers not to mention the fact that his government long supported such authoritarian regimes and almost slept through the epochal political upheaval in the region this year. He presents himself in the Egyptian capital as a friend of the Arab Spring and an attorney for the Palestinians.

Behind the rhetoric lie Ankara's political and economic interests. Erdogan's energetic promotion of those interests has rubbed some in the region the wrong way. 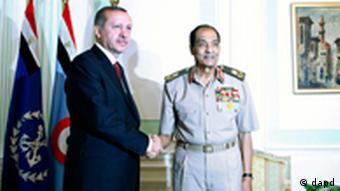 As a free market democracy with a majority Muslim population, Turkey has been mentioned over and over again in recent months as a role model for the nations that have freed themselves from dictatorships during the Arab Spring.

The Turks are flattered and are now attempting to cash in on their image as a modern state that combines democracy and Islam in order to win economic and political influence in the region. It is no coincidence that representatives from 300 Turkish companies are accompanying Erdogan during his tour of North Africa.

Critics, however, accuse the Turkish government of practicing a "neo-Ottoman" foreign policy that models itself on the centuries-long rule of the Sultan throughout much of the Middle East. Sahin Alpay, a political scientist in Istanbul, sees these accusations as mistaken.

"They are not dumb," said Alpay, pointing out that Turkey's governing politicians are well aware that imperial nostalgia will not win any new influence in the region.

The regional ambitions of Turkey are based on the cool, calculated ambition to better implement its interests and to secure new growing markets for the Turkish economy.

"The economy is decisive," said Alpay.

Last year, almost a third of Turkish exports went to the Middle East and North Africa. Exports have indeed sunk recently due to the political unrest in the region, but business people traveling with Erdogan want to make sure their companies have a foothold when trade picks up again.

Politically, Erdogan has several goals. In the long-term, he wants Turkey to act as a sort of mentor to the new governments in Egypt, Libya and Tunisia. He is after all the first premier of a large country to visit the three most important countries of the Arab Spring. 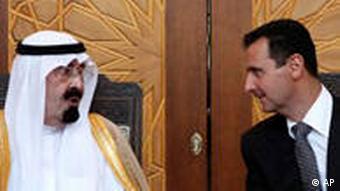 Some Arab regimes are suspicious of Ankara's regional ambitions

In the short term, Erdogan wants to secure new allies for his internationally controversial hard line against Israel. He emphasized in Cairo that - for him - there is no difference between the nine Turkish activists shot to death by Israeli forces on the Gaza-bound flotilla in 2010 and the five Egyptian police officers recently killed by Israel as it pursued Palestinian militants.

Before departing on his tour, Erdogan openly spoke of the desire to visit the Gaza Strip from Egypt. But reservations on the part of the Egyptians and Palestinian President Mahmoud Abbas discouraged the Turkish premier from following through on his plans. Erdogan has spoken out even louder in favor of the Palestinians' bid to apply for UN-recognition in the coming week.

Although the Arab public worships Erdogan like a pop star for his hard line against Israel, governments in the region are not as enamored as their people. Arab states view the Turkish attempt to establish a regional leadership role with distrust, even if the influence of Ankara helps to keep the feared Iranian regime in check.

The political upheaval praised by Erdogan strikes many Arab rulers as sinister. Alpay says Saudi Arabia and the Gulf states are particularly "disturbed by the Arab Spring and also disturbed by the Turkish influence." But none of that seems terribly important to Erdogan as he speaks from the podium in Cairo.

During a regional tour of the successful North African Arab Spring nations, Turkey's premier has declared his solidarity with the Palestinian drive to join the United Nations while criticizing Israel's position. (14.09.2011)

Relations between Turkey and Israel have reached a historic low in the aftermath of last year's fatal Gaza flotilla raid. Ankara now plans to provide military escorts for humanitarian aid to the Gaza Strip. (09.09.2011)

US caught out by speed of escalation in Israel-Turkey crisis

As the diplomatic spat between Turkey and Israel deepens, the United States appears to have been caught out by the speed and nature of the escalating crisis as it threatens to spread across the Middle East. (08.09.2011)