Germany and Turkey both want to host Euro 2024 and the deadline for applications is now up. Turkey's chances are considered decent — because of President Recep Tayyip Erdogan, and despite his recent human rights record. The Istanbul stadium's roof shimmers in the sun, the writing on it reflects the light and catches the eye. Basaksehir, the name of this part of town, is emblazoned in large letters on the side of the ground, and the floodlights are already gleaming. A top-flight Turkish football league match is about to start.

This is the stadium of Istanbul Basaksehir F.K., the new upstart of Turkish football. It's in the middle of a new residential area on the outskirts of the major metropolis. The Basaksehir Fatih Terim Stadium, named after former national team player and coach Fatih Terim, can hold around 17,000. But it won't fill half those places. It's just turned four years old and is no bad starting point when you're talking about Turkey's application to host Euro 2024.

Firstly, there's the stadium itself: it's one of more than 30 that Turkey — or more precisely Turkish President Recep Tayyip Erdogan — has either renovated or built from scratch in recent years. And it's not even foreseen as a Euro 2024 venue. Even now, six years before the tournament, Turkey's stadiums would be ready for the Euros. That's despite a limited domestic market — average attendance for a Turkish Super League game isn't even 10,000 spectators.

Next, there's the president's own influence on football. Erdogan himself played in the opening game at the stadium in Basaksehir and netted a hat trick. He was best man at the club president's wedding. Erdogan's personal physician is also said to be one of the club's main backers. 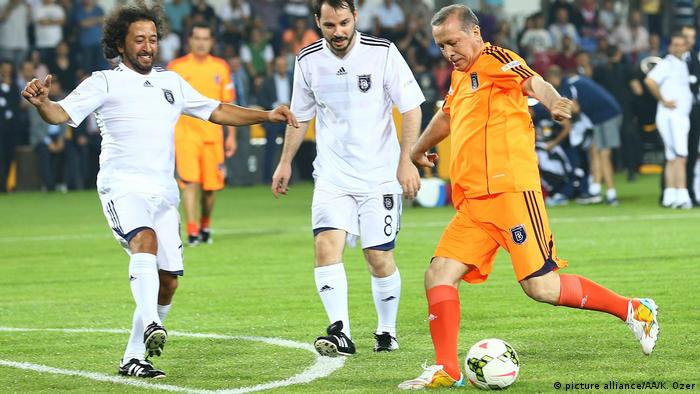 Erdogan en route to his hat trick in the opening night exhibition game in 2014: as you can see, the defenders aren't exactly moving heaven and earth to stop him

Within a few years, a nothing-club has been transformed into a serious contender for the Turkish title against Istanbul's "Big Three" of Besiktas, Fenerbahce and Galatasaray. With the right friends, things can work like that in Turkey.

"Basaksehir owes all of this to our honored President Recep Tayyip Erdogan," one fan says outside the ground. "Everything's improved thanks to him. We're grateful for it."

Erdogan's relationship with football is a special one. Formerly a semi-professional player, purportedly nicknamed "Imam Beckenbauer" by his teammates, he wants his country to finally host a major sports event. Turkey has already applied for the Olympics five times and for the Euros on three occasions. Ninth time is meant to be the charm.

If you ask fans around the stadium, you'll hear positive receptions: "That would be great for our country. A very important advertisement," or: "We're ready to do whatever's necessary to get it."

In five months, on September 27, the 18-member executive committee of UEFA will decide whether Germany or Turkey should host Euro 2024. The deadline for applications expires on Friday. Germany's delegation went to UEFA's Nyon HQ on Tuesday to file the paperwork; Turkey's followed on Thursday.

Talking behind the scenes to representatives of European football, they repeatedly hint that Turkey's chances are good. Erdogan's political influence seems to play a role here. Despite the strained human rights situation within and around his borders, Erdogan doesn't lack for friends, especially in eastern Europe. Admittedly, one of UEFA's criteria for the tender is upholding human rights, but quite how large a role this consideration plays in decisions is very much up for debate.

Post-coup crackdown, not least on the press

"Turkey's no longer a free and democratic country," says Yonca Sik, who was born near Cologne. She's sitting on a chair in the living room of her apartment near the Bosporus. She's married to investigative journalist Ahmet Sik, one of Turkey's most renowned writers and — for some time — one of its best-known prisoners. 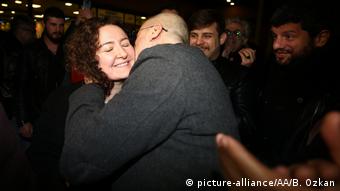 Ahmet Sik and Yonca Sik after the journalist was released from pre-trial custody, and weeks before he'd be sentenced to years in jail

He sat in jail for a total of 14 months, before his surprise release from pretrial detention early in March. This week, though, he and a dozen colleagues from Turkey's Cumhuriyet newspaper were sentenced to jail terms, with Sik given seven-and-a-half years.

"The whole world got to see this so clearly after the release of Deniz Yucel," Yonca Sik says, referring to a reporter for German daily Die Welt whose imprisonment became a protracted source of diplomatic strain between Berlin and Ankara last year. "These prisoners are all political hostages. The powers that be simply don't want the government — and especially Erdogan — to face criticism."

These are strong words, particularly right now in Turkey, a country where free speech's protection under the law is currently patchy at best. You get the distinct sense here that everyone you talk to is exceedingly wary of going too far when criticizing the government, state, or Erdogan himself.

More than 150 journalists are currently in jail, making Turkey a world leader in the field. More than 100,000 people — including judges, teachers and civil servants — have been removed from their jobs in the aftermath of 2016's failed coup. This political atmosphere is also impacting Turkey's bid for the football tournament.

Pre-match adverts for the military intervention in Syria

The Recep Tayyip Erdogan Stadium is in the center of Istanbul. It's another small ground, but of course recently renovated, located in the Kasimpasa neighborhood where Erdogan was born. Jean-Francois Perouse ambles past the stadium gates. The French author has written the book "Erdogan: Nouveau pere de la Turquiye?" ("Erdogan: Turkey's new father?").

"Erdogan is using football to mobilize the masses, obviously in his favor," Perouse says. "He's called early presidential elections and then there's scheduled to be another vote directly before Euro 2024." Clearly, the Turkey expert notes, the excitement of hosting the tournament wouldn't hurt Erdogan's campaign.

To get a real understanding of how football is hijacked by politics in Turkey, you need to wander across town to the Besiktas neighborhood. Besiktas are playing on this particular evening, but away from home, so fans are gathering in the narrow streets of the popular evening hangouts. Tables and televisions are placed outside, people are eating and smoking hookahs — and watching the game, of course.

Right before the Besiktas match, a propaganda video praising Erdogan's military intervention in Kurdish-controlled areas of northern Syria comes on air, replete with children saluting in military uniforms. TV channels are obliged to play such footage, especially before a big game, and nobody seems to complain. The government barely even camouflages its bid to use football to push its own agenda.

At one table, there sits the founder of Turkey's most famous supporters' organization, Carsi, named after a famous marketplace in Besiktas. Cem Yakiskan is a legend in the Turkish fan scene. He's also one of more than 30 prominent football supporters threatened with a possible jail term because they participated in the political Gezi Park protests of 2013 — seen by some as the turning point when Erdogan's once-lauded reformist government began morphing into a far more authoritarian regime. 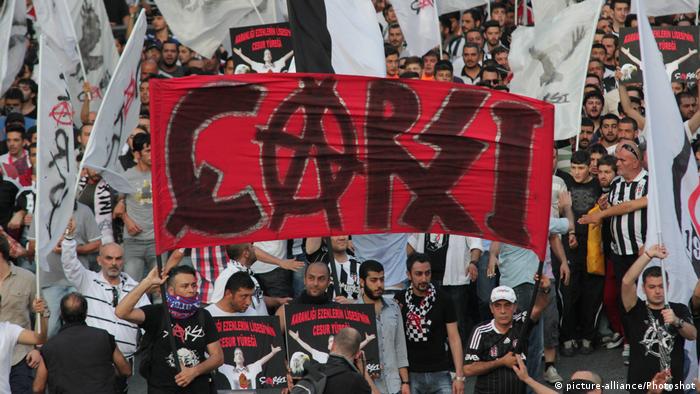 The Carsi supporters' organization was front-and-center in the Gezi Park protests of 2013, with the cause even uniting rival Fenerbahce, Galatasaray and Besiktas fans

"During Gezi, five years ago, we still had some hope. Hope for humanity, for Turkey, for ourselves," Yakiskan says, pausing: "And now we have none left."

- While researching this story, ARD Sportschau also requested an interview with President Erdogan, his sports minister and the national football association. All three declined.

Germany and Turkey may be about to contest the right to host Euro 2024, confirming themselves as the only candidates after the deadline for applications passed. The host will be decided by UEFA in September 2018. (03.03.2017)