International rights groups criticized the case as emblematic of deteriorating press freedom in Turkey. Cumhuriyet is one of the newspapers critical of Turkish President Recep Tayyip Erdogan. 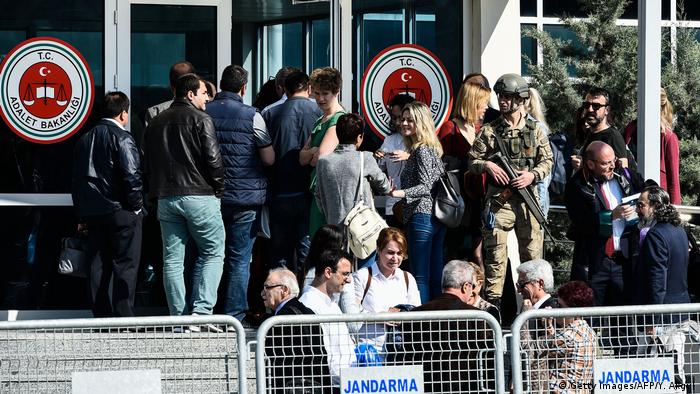 A Turkish court on Wednesday sentenced 14 staff members of the country's main opposition newspaper, Cumhuriyet, to prison on charges of supporting terrorist groups.

Rights groups, including Amnesty International and Reporters Without Borders, had sharply criticized the case amid broader fears about a crackdown on press freedom in Turkey.

Sabuncu told DW after the trial: "These [sentences] will not hold us back from doing the profession with courage ... this is Turkey's and Turkish justice's shame. I hope that this decision will be overturned by the high court. I call on everyone living in Turkey to be courageous."

Caroline Stockford, the Turkey Advocacy Coordinator at International Press Institute (IPI), told DW: "It's a shocking disgrace that with no evidence and many breaches of protocol in the courtroom, such decisions can be reached. They are absolutely baseless and ridiculous."

Opposition lawmaker Sezgin Tanrikulu from the Republican People's Party (CHP) told DW: "Justice did not take place. Journalism and people's right to get news were sentenced."

What is Cumhuriyet? The daily newspaper, whose name translates to "Republic," is one of the most prominent media outlets critical of Turkish President Recep Tayyip Erdogan. It is also the country's oldest daily newspaper — it was founded in 1924, one year after the creation of the modern Turkish state.

Free press under threat: The Turkish government under Erdogan has governed the country under an emergency law passed after the failed 2016 coup. Authorities have used the decree to arrest opposition journalists and shut down several media organizations.

Freedom of the press is seriously under threat in Eastern Europe. Europeans like to see themselves as torchbearers of democratic values, but DW's Volker Wagener says the reality tells a different story. (25.04.2018)