Aydin Engin: ′State of emergency being used to silence dissident voices′ | Middle East| News and analysis of events in the Arab world | DW | 07.11.2016

"Cumhuriyet" journalist Aydin Engin speaks to DW about the newspaper's future in the current environment in Turkey. And he voices grave fears about the future of the country itself. 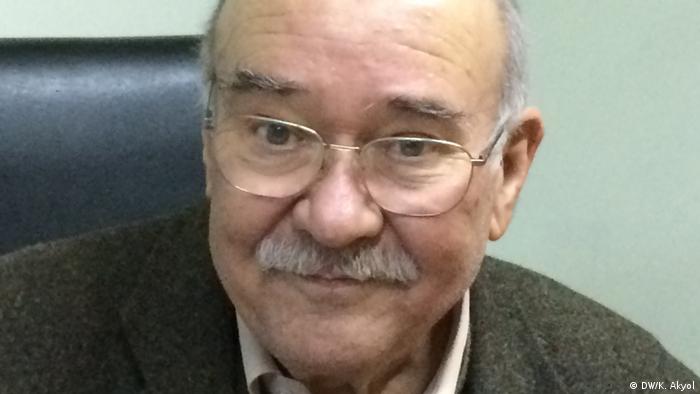 Aydin Engin, one of the two "Cumhuriyet" journalists who were released after being detained for five days, said the protesters that have gathered in front of the Turkish newspaper for the past week are there because they feel suffocated with regard to democracy and freedom.

During the state of emergency declared in Turkey after the July 15 coup attempt, more than 170 media outlets were shut down, not to mention the hundreds of websites. Thousands of journalists are out of work.  According to the activist group Reporters Without Borders, Turkey is "the biggest journalists' prison," with more than 140 currently behind bars.

In this environment, the operation against the executives and journalists of Turkey's oldest and most respectable newspaper, "Cumhuriyet," has met with insistent protests by its readers. Hundreds of people are holding vigil day and night in front of the newspaper building in one of Istanbul's busiest neighborhoods.

Nine of the 13 executives and writers of "Cumhuriyet" were arrested at midnight Friday after their five-day detention period had ended. Aydin Engin and Hikmet Cetinkaya were released on the grounds of old age, both being over 70. They went directly back to the newspaper after being released.

Aydin Engin is 76 years old and has been a journalist for 47 years. He has been a witness to all the military coups in Turkey from the first one in 1960.

DW: Did this operation surprise you?

Aydin Engin: No. After the start of the state of emergency, as a media outlet without a party affiliation, "Cumhuriyet" was the only dissident voice left that defended freedom, democracy and secularism. We didn't hope or expect them to put up with this in such an environment. That's why we weren't surprised. However, we didn't know exactly what would happen. To tell you the truth, we never thought it would be such a primitive and hollow attack.

What kind of attack, if any, did you expect?

Engin: There are many ways to silence "Cumhuriyet," more effective ways that would yield better results, such as appointing a trustee, which they have done with many other media outlets. I mean, detaining 13 journalists is a scandal never seen before in the history of the republic. I want to iterate this. I confess, I was expecting something, but nothing like this. 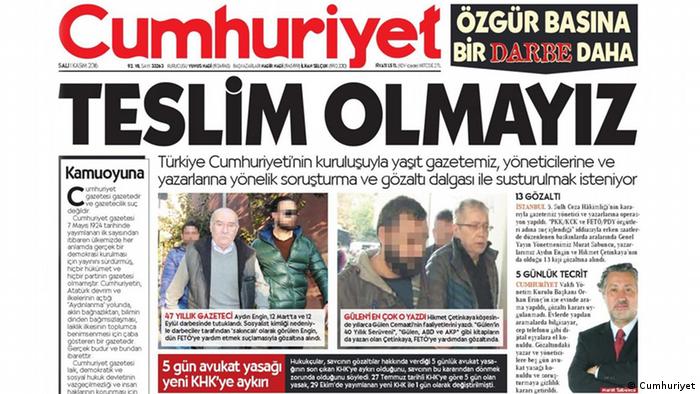 "Cumhuriyet" is Turkey's oldest newspaper of any standing

There are some that characterize the charges as "incomprehensible” or even "utter nonsense.”

Engin: They used these terms. After I was released at 2 a.m. and came directly to the newspaper, they asked me the same thing. Spontaneously, I said that I had never seen such a immoral case. I think my description is more apt, because there should have been a more serious charge if it was a case of detaining 13 journalists, holding them for five days, cutting them off from the world and then arresting nine of them.

Nine staff members of the opposition Turkish newspaper "Cumhuriyet," including its editor-in-chief, were placed under formal arrest. (05.11.2016)

Kurds take to the streets of Cologne in anti-Erdogan protests

Some 7,000 German-based Kurds have protested the Turkish government's detention of pro-Kurdish politicians and journalists. Turkish authorities detained 15 top-level officials from the pro-Kurdish HDP on Friday night. (05.11.2016)

For me, the disgrace is that the charges were based upon the statements of dishonorable people who sang like canaries, saying everything that the prosecutor would want to hear. None of the charges had any substantial evidence backing it. It would take me hours to list the complete absurdities of the case.

Do you think there's a chance that a trustee will be appointed?

Engin: Of course there is. There's no legal obstacle to this in a state of emergency. I mean there is none even if it is done at the risk of violating the laws and justice. But I have a strong belief that the parties in the parliament, as well as some political powers that we believe to be very determined, will put up a wall to stop this appointment. I'm alluding especially to the Republican People's Party (CHP), even if they have faults when it comes to the defense of democracy.

If there is a trustee appointed, what kind of stance will you and the other journalists take?

Engin: First, because I know the practice of trustees in other newspapers, we don't need to make any additional decisions. Because the trustee will ask you, "Will you work with us? We will publish the paper that we want to publish, so will you work at that newspaper?" If you think you're cunning and you cheat and think "I'll do as I please" and say yes, they fire you. Or the ones that say, "I will not blacken the name of journalism by working at your newspaper," will quit.

Secondly, and most importantly, I find questions about what we will do if there is a trustee appointed to be very disdainful. We're saying that a trustee will not be appointed. And even if it does happen, we will continue to put out a great newspaper until that day comes. We have that responsibility; we have stated that purpose. Tomorrow we will meet again and say, "Are we putting out a newspaper today? Yes. Then let's put out a great paper. A paper that will defend democracy, human rights, freedom and secularism." But we don't know if we'll be able to do this the day after that. 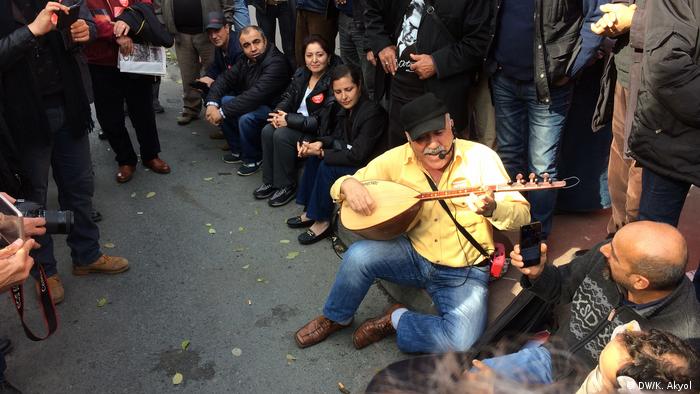 In your first column after you were released, you wrote that your heart was with your detained friends. You also wrote that you didn't feel the need to write about your five-day detention. Can we ask you about that? What did you go through? We know that you have serious health problems.

Engin: I don't want to boast, but this isn't the first time I've been detained. I've been through this many times in my career. Our circumstances were very favorable. There's no need to lament and say, "Oh, the things we went through." We weren't treated badly. We were treated with respect because we were from "Cumhuriyet." In fact, I think that someone had pulled strings for us. Being detained always comes with hardships. Like hygiene. But I would never say that we were physically challenged, treated badly or that they used any kind of violence.

After you were detained, hundreds of readers and protesters gathered in front of the newspaper building. Even after a week, there are still dozens of people on the street, day and night. What kind of support does this give you?

Engin: We are faced with a government that considers the attack against "Cumhuriyet," the declaration of the state of emergency and the coup attempt as the "will of God," and uses this to silence all dissident voices, instead of punishing the coup plotters. However, this attack against "Cumhuriyet" is just one more step too far. This is the reason why people that feel suffocated with regard to democracy and freedom have been gathering in front of the newspaper building.

No one organized this. Especially not "Cumhuriyet." Another line was crossed. It was the rebirth of the spirit of Gezi, so to speak. To us, this is the joyful proof that a handful of people are still determined to defend freedom, democracy and secularism.

Your age has been brought up a lot. And you came directly to the newspaper after being released and started working. I can see today you're so busy that you barely have time to breathe. What is your motivation?

Engin: My profession. We have a great profession. A proud profession. I must be able to tell my grandchildren, "That day, I was back to doing my job."  That is why I came directly to the newspaper instead of going to see my wife, whom I missed very much. This isn't courage or heroism: this is the necessity of our profession. I wouldn't consider anyone who doesn't do this as a journalist.

Yes, it was tough. I was very happy while detained. No phones, no internet, no cell phones, you don't have to think about food. We weren't being treated badly. Now I'm back at work, slaving away. I am a lazy man at heart. That's why I don't feel the need to complain. 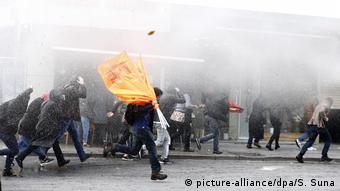 Kurds have demonstrated at the HDP arrests

Is there anything you wish to add?

Engin: Yes, this attack against "Cumhuriyet" is just one facet of the issue. However, in the meantime, the arrest of nine MP's from the pro-Kurdish Peoples' Democratic Party (HDP) is one other proof of the same frightening inclination. The government holding the reins of the republic seems intent on solving the Kurdish problem with military methods.

They're telling the Kurds, "We are not giving you the right to fight on a constitutional political level." This can mean just one thing: war. Now the hawks have a large and open field in front of them. And the voice of the doves and other outsiders can't be heard anymore. It seems that the hawks have banded together with warlike intent. I am worried that this will be a serious step that will sweep Turkey into the darkness.

The interview was conducted by Kürşat Akyol, Istanbul.