The Turkish government has accused the HDP leadership of aiding terrorist groups. The raids came as part of a greater, ongoing crackdown on dissident voices since the failed July 15 coup attempt. 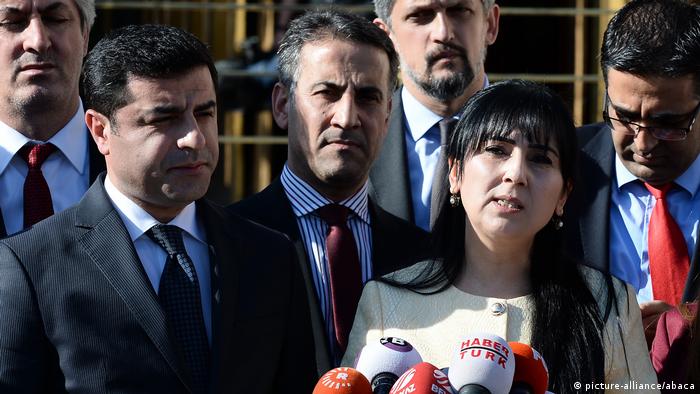 Turkish police raided the houses of the party's co-leaders, Selahattin Demirtas and Figen Yuksekdag, in two separate raids, arresting the two over their reluctance to give testimony for crimes linked to "terrorist propaganda."

The state-run news outlet Anadolu Agency reported that the detentions came after the HDP leaders refused to testify before prosecutors.

At least 13 other HDP parliamentarians were also detained in the operation, lawyers said.

The HDP is the third-largest contingent in Turkey's 550-seat parliament, holding 59 seats. Fifty-five HDP legislators have been stripped of their immunity from prosecution by a parliamentary measure advanced by the ruling Justice and Development Party (AKP).

President Recep Tayyip Erdogan and his government regularly accuse the HDP of having links to the outlawed Kurdistan Workers Party (PKK), charges the HDP denies.

HDP members of parliament aren't the only ones under attack by the government. A number of freely elected HDP mayors were suddenly, and without warning, removed from office recently and replaced by Erdogan loyalists.

The Turkish government has used a failed coup attempt in July as justification for launching a sweeping crackdown on anyone it believes may have some connection to US-based preacher Fethullah Gulen, who Turkey claims orchestrated the failed putsch.

The government has offered little, if any, evidence to substantiate its claim, and Gulen has categorically denied any connection to the plot.

Still, Turkey remains under a state of emergency since the failed coup, but critics accuse the government of extending its security crackdown far beyond the actual coup plotters.

Tensions are rising in the predominately Kurdish southeast, since a ceasefire declared by the PKK collapsed last year. Since then the PKK has re-upped its attacks against Turkey's security forces - killing hundreds of soldiers and police officers.

Erdogan, himself, frequently attacks Demirtas - and many analysts see him as the only politician in Turkey who rivals the president's charisma. Demitras has made a personal crusade out of opposing Erdogan's plan for a presidential system.

Journalists have also come under attack by the government; 11 from the Cumhuriyet newspaper have been detained this week. The center-left daily was established in 1924, and this year received the Right Livelihood Award, which is considered an alternative Nobel Prize.

'We will not surrender,' says Turkey's 'Cumhuriyet' newspaper after detentions

A Turkish opposition newspaper has vowed not to remain silent after several executive staff members were detained in police raids. The crackdown has been sharply criticized by Western politicians. (01.11.2016)