The number of jailed journalists has hit a historic high for the second consecutive year, according to the Committee to Protect Journalists' press freedom snapshot. China and Egypt join Turkey as the worst offenders. 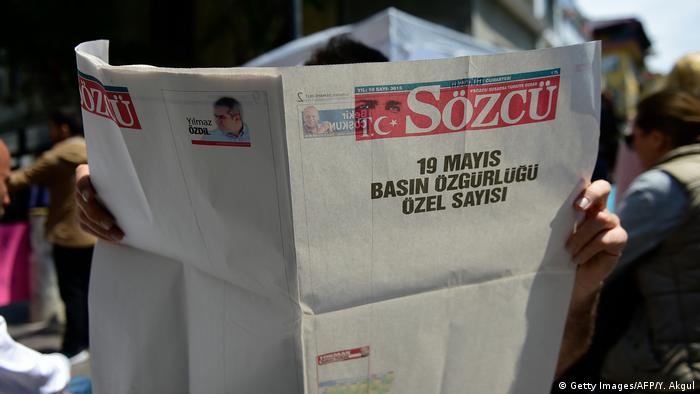 In May, Turkish newspaper Sozcu showed the headline "Freedom of Press special edition" on a blank page.

Turkey remains the world's worst offender for the second consecutive year when it comes to jailing reporters for their work. That's according to an annual report on press freedom released on Wednesday by the Committee to Protect Journalists (CPJ), a watchdog.

Despite releasing a handful of reporters this year, 73 journalists remained behind bars in Turkey compared with 81 last year, according to the CPJ. Dozens of others face trial, usually for alleged anti-state, terror-related crimes. Authorities also regularly carry out new arrests and shut down news organizations.

The Turkish government's crackdown against the press, which began in 2016 and rapidly accelerated in the aftermath of the failed coup attempt that summer, has fractured relations with Germany. Chancellor Angela Merkel has repeatedly called on Ankara to release Turkish-German journalist Deniz Yücel, who has been held without charge since January.

According to figures released earlier this year by the German foreign ministry, there are around 50 Germans currently imprisoned in Turkey, of whom nine — including four with dual German-Turkish citizenship — are being held for what Berlin considers political reasons.

The CPJ found that the number of the journalists imprisoned in China and Egypt, who join Turkey as the worst three offenders, are suffering from poor health.

Attorneys for jailed Chinese reporters, whose number rose to 41 from 38 this year, told the CPJ of how authorities had at times halted special medical treatment and even outright refused it.

Read more: Opinion: The other China

In Egypt, more than half of the 20 imprisoned journalists are in poor health, according to CPJ.

The CPJ annual snapshot found that of the 262 reporters imprisoned, almost two-thirds were detained on anti-state charges.

The CPJ said it had found governments were increasingly passing vaguely worded anti-terror legislation, which according to the watchdog is intended to intimidate critical reporters into silence. Anti-terror laws in Turkey, for example, will often conflate reporting terrorist activity and condoning it.

This increasingly common practice has seen a number of new states added to this year's list offenders. Notable states include Ecuador, Morocco and Ukraine.

The age of Trump

According to the CPJ, the pattern "reflects a dismal failure by the international community to address a global crisis in freedom of the press."

Repression on the press in authoritarian, US-allied states was in large part sanctioned by US President Donald Trump's own "nationalistic rhetoric, fixation on Islamic extremism, and insistence on labeling critical media "fake news," according to the watchdog.

Read more: Trump slams media as 'enemy of the people'

Trump's attack on the US press had effectively reinforced a legal framework in authoritarian states to allow leaders to preside over the detention of journalists.

Having met with the leaders of Turkey, China and Egypt during his first year as president, Trump has made no public reference to human rights abuses in the country.

In fact, after meeting with Trump in April, Egyptian President Abdel Fattah al-Sisi passed a number of anti-terrorism laws critics say are specifically designed to target journalists. Under the new legislation, reporters acquitted of anti-state charges can nevertheless be placed on a terror watch list and have their financial rights restricted.

The pair has been charged under the colonial-era Official Secrets Act, for which violations are punishable by up to 14 years in prison. Myanmar has arrested several journalists in recent months. (13.12.2017)