Arrest warrants have been issued for 35 media professionals and at least nine were arrested in a series of raids. Reporters Without Borders ranks Turkey at 155 out of 180 countries in its press freedom index. 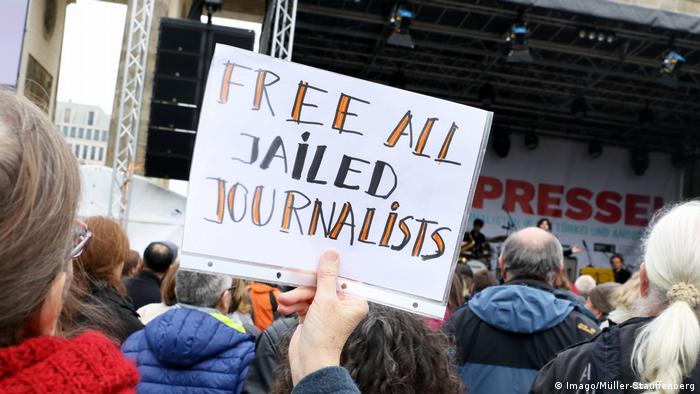 Gulen, a one-time ally of President Recep Tayyip Erdogan, has been accused of organizing a failed coup in Turkey in July 2016. Gulen has repeatedly denied any involvement.

One of those arrested was Burak Ekici, who runs the secular left-wing newspaper Birgun. Ekici was just the latest victim of a widespread crackdown in Turkey on journalists who are critical of Erdogan's government.

Of the 160 journalists currently in jail in Turkey, one is German citizen Deniz Yucel. A writer for Die Welt newspaper, Yucel stands accused of terrorism charges. Despite running the risk of permanently damaging relations with a key ally, Ankara has refused to release the reporter.

Security services also carried out several raids, looking for journalists and other opposition voices accused of using the banned Bylock messaging app. The government says that this app was used by Gulen and his supporters to organize the coup attempt.

The latest ranking for press freedom released by Reporters Without Borders puts NATO member and EU-aspirant Turkey in place 155, out of 180 ranked countries, beneath Belarus and the Democratic Republic of Congo.

Sebastian Kempkens has reported that he was attacked during Turkish Foreign Minister Mevlüt Cavusoglu's rally in Hamburg. He said the ruckus began after he held up a sign supporting detained journalist Deniz Yucel. (09.03.2017)