A German publishing group lodged a complaint to the European Court of Human Rights over Turkey's detention of reporter Deniz Yucel. He was detained in February and stands accused of spreading "terrorist propaganda." 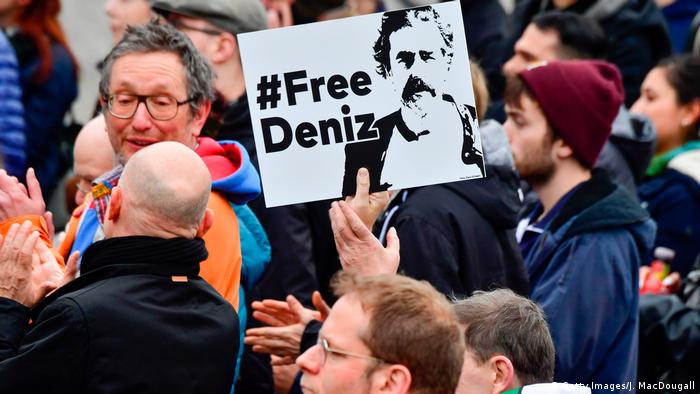 The German publisher WeltN24 has accused Turkey of violating German-Turkish journalist Deniz Yucel's right to freedom of expression and lodged a complaint before the European Court of Human Rights in Strasbourg on Friday.

Yucel's reported on Turkey for one of WeltN24's flagship dailies, "Die Welt," before being arrested by Turkish authorities in February for allegedly spreading terror propaganda.

Read more: Jailed German-Turkish journalist Yucel 'only gets a peek at the sky'

In its complaint to Europe's top rights court, the publisher said that Yucel's unwarranted detention makes "reporting on location in Turkey impossible."

WeltN24 managing director, Stephanie Caspar, said the complaint was an important step in seeking their journalist's release. "We will use all legal means to defend freedom of expression, Deniz Yucel and our publication," Caspar said. "You cannot stand by when a journalist is sent prison for just doing their job."

Yucel had already lodged a complaint procedure against the Turkish government to the Strasbourg court back in April. The ECHR has asked Ankara to present its position in the matter.

Germany's foreign minister, Sigmar Gabriel, told "Die Welt" in June that he expected the ECHR to make a quick decision on Yucel's release, adding that Turkey could still save face by complying with the ruling. German Chancellor Angela Merkel has described Yucel's detention as “bitter and disappointing”.

How Turkey would respond to any release order, however, remains unknown. Yucel faces serious charges of inciting to hatred and producing terrorist propaganda on behalf of the outlawed Kurdistan Workers' Party. Yucel has denied the allegations.

Read more: Erdogan rules out releasing German-Turkish journalist Yucel 'as long as I am in power'

His arrest came as the Turkish government had culled more than 150,000 public sector jobs in response to last year's botched coup attempt that saw the military try and fail to oust President Recep Tayyip Erogan. Tens of thousands have subsequently been arrested.

The Turkish government's crackdown on dissenting voices has also seen around 160 journalists incarcerated, while authorities have shut down more than 130 publishers and media groups.