Turkey's main opposition party has asked the electoral board to annul the results of Sunday's vote amid concerns about the poll's legitimacy. Election observers said they got little help investigating charges of fraud. 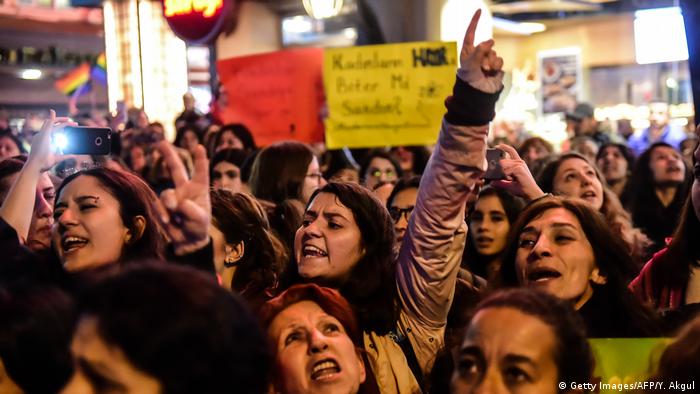 A wave of protests in Istanbul showed no signs of abating on Tuesday evening as calls for an investigation into Turkey's referendum results began to gather steam.

Why many Turks in Germany voted 'yes'

Hundreds of thousands of expat Turkish citizens in Germany voted in favor of giving sweeping new powers to the office of the Turkish president. Many Germans, and Turks who voted "no," are taken aback. (19.04.2017)

Observers have said the Turkish referendum fell short of international standards, arguing both sides did not have equal campaign opportunities. Turkey's president said monitors should not criticize, but know their place. (17.04.2017)

Turkey's National Security Council has called for the country's state of emergency to be extended for another three months. Thousands of protestors in Istanbul have denounced new powers granted to President Erdogan. (18.04.2017)

"Thief, murderer, Erdogan," shouted some of the thousands of demonstrators in Istanbul's Besiktas district, while similar protests took place in the capital, Ankara, Izmir and cities across the country.

International observers have noted irregularities in voting, with the European Union on Tuesday calling for an investigation after the Organization for Security and Cooperation in Europe (OSCE) said the referendum was conducted on an "unlevel playing field."

Turkish Foreign Minister Mevlet Cavusoglu on Wednesday accused the OSCE of deliberately putting errors into its report. Erdogan's government used emergency powers to silence opposition media and constrain the "No" campaign ahead of the vote.

The OSCE's top election observer, Michael Link, told German media on Wednesday that Turkish authorities were not cooperating in addressing alleged election manipulation. He also criticized the YSK, saying, "the quickly made decision of the electoral commission to validate wrongly or not at all stamped ballots is a violation of Turkish law."

Turkish media reported the YSK made the decision to accept unstamped ballots within 40 minutes after the ruling AK Party filed a petition on election day.

"This was a vote without legitimacy," said Bulent Tezcan, deputy chief of the main opposition Republican People's Party (CHP).

Responding to a Supreme Election Board (YSK) decision to allow ballot envelopes without official stamps to be accepted, the CHP has formally petitioned the body to annul the result. According to Turkish law, unstamped ballots are invalid because it opens up the possibility of fraud.

CHP leader Kemal Kilicdaroglu went even further, saying the government and the YSK had together "staged a coup against the national will."

YSK head Sadi Guven said he would evaluate the appeals on Wednesday.

Despite concern from abroad, two world leaders - US President Donald Trump and Russian leader Vladimir Putin - have called Erdogan to congratulate him on the result.

In an interview with CNN on Tuesday, the Turkish president said he would be happy to meet with Trump and "take our relationship forward."

In the same segment, Erdogan brushed aside allegations of creeping authoritarianism, saying: "This is not a system belonging to Tayyip Erdogan. I am a mortal being, I can die any time."

The YSK has said official results will be presented in 10 days, and only then could the opposition appeal the results to the constitutional court.