Turkey's National Security Council has called for the country's state of emergency to be extended for another three months. Thousands of protestors in Istanbul have denounced new powers granted to President Erdogan.

Thousands of protestors took to the streets of Istanbul on Monday for a second night of protests against President Recep Tayyip Erdogan. The demonstrators denounced impending "fascism" in Turkey after Erdogan won a referendum on Sunday that will give him sweeping new powers.

"We are shoulder to shoulder against fascism," the crowd chanted, filling the Besiktas and Kadikoy district's of Turkey's largest city. Smaller protests were held all around Turkey, including in the city of Antalya, where at least 13 demonstrators were arrested. 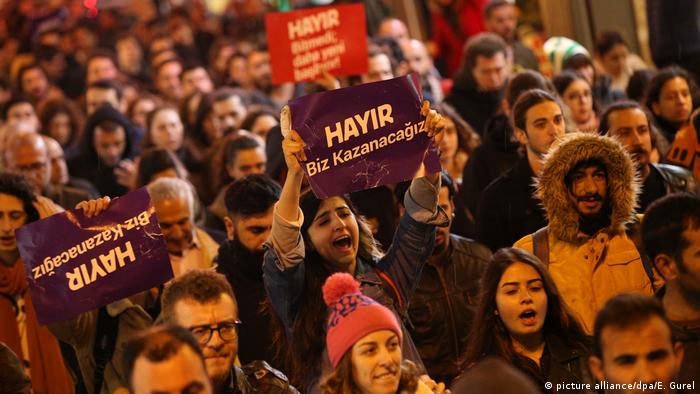 'No' voters demonstrated in Istanbul on Monday night

Erdogan won Sunday's constitutional reform vote by taking 51.41 percent of the ballots, a margin of 1.3 million over the 'no' votes. However, the opposition CHP are challenging the results, claiming 2.5 million of the votes are "problematic" due to irregularities such as a lack of official stamps, or unsealed envelopes.

As a result of his victory, the president will no longer have to share power with the prime minister, whose post is due to be abolished. The entire executive branch will thus be under the direct power of the president.

Although Turkey's three largest cities - Istanbul, Izmir and the capital Ankara - all voted "no" against the reforms, Erdogan was very successful in more rural parts of the country. At a victory rally in Ankara, the president praised his supporters for "standing tall," in the face of what he dubbed the "crusader mentality" of Western countries. 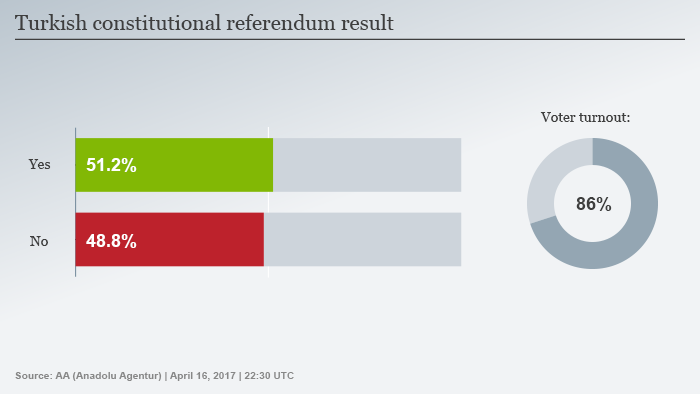 In light of potential unrest, the National Security Council moved on Monday to extend a nine-month state of emergency first put in place in response to July's failed coup attempt. It will now remain in place for a further three months.

The decision, which still requires parliamentary approval, would give even more powers to security forces over detentions and arrests - which have skyrocketed in Turkey since the violence last summer.

President Erdogan made it clear immediately how he planned to wield his new executive powers, suggesting he may bring back the death penalty - something that flies in the face of decades of negotiations for entering the European Union.

German Foreign Minister Sigmar Gabriel said that reintroducing capital punishment would be "synonymous with the end of the European dream."

The statement prompted Erdogan to fire back, in an interview to be published by the German newspaper "Bild" on Tuesday: "What George, Hans or Helga say does not interest us."

Gabriel was not the only foreign voice to express dismay. Many international observers decried the results, suggesting that the referendum had not taken place on a level playing field. On top of some alleged irregularities, Erdogan's government has imprisoned a vast number of critical academics and journalists on espionage and terrorism charges.

"The legal framework... remained inadequate for the holding of a genuinely democratic referendum," the OSCE Office for Democratic Institutions and Human Rights said. Opposition parties also pointed out that the electoral commission had accepted ballots without official stamps on them, which may easily allow for fraud.

However, US President Donald Trump reportedly called Erdogan to congratulate him on the outcome of the vote.

"Trump called Erdogan tonight and congratulated him on his success in the referendum," government sources said, according to state-run news agency Anadolu.