After a close referendum, a divided Turkey celebrates, mourns

Following a narrow victory in a referendum to expand presidential powers, Turks in Ankara react with jubilation and fear over nation’s future. Diego Cupolo reports from Turkey’s capital city. 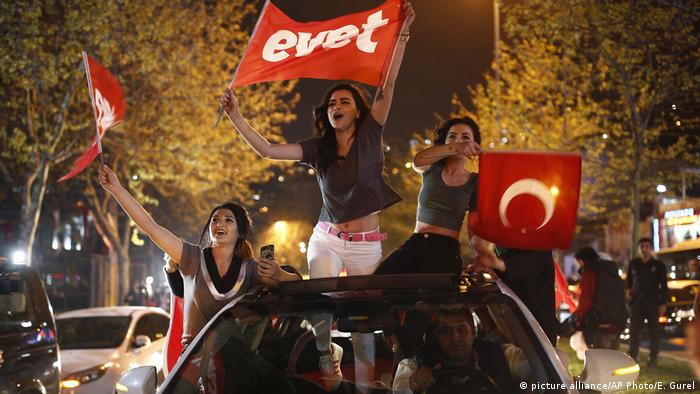 Rainfall came over Ankara as the final votes were counted in Turkey's referendum, but that didn't stop crowds from taking the streets in celebration. A chorus of car horns, chants and fireworks filled the night as supporters of President Recep Tayyip Erdogan reveled in their victory.

The bid to consolidate governmental powers under the presidency claimed a narrow and much contested win, with 51.37 percent of voters choosing "Yes,” according to the state electoral board.  Yet the close vote reflects a nation divided under Erdogan, with much of the population unnerved by his increasingly authoritarian leadership and ongoing purges following the failed coup.

Mehpare, 30, an art teacher who gave only her first name, stayed in her apartment Sunday night, watching crowds of Erdogan supporters pass in the street below.

"As a person who lives in Turkey, I can't believe that we share the same country,” Mehpare said of ‘Yes' voters. "I closed the windows because I don't want to hear their voices.”

She went on to say she voted ‘No' because she supported a more democratic, secular nation, which she fears will be impossible to foster under Erdogan, who has mobilized the role of religion in Turkish politics since coming to power in 2003.

Mehpare said she was in shock by the ‘Yes' victory, but expected it, as well.

"They only won because they cheated,” she told DW. "I really want to leave this country now, but I don't know how. I don't have money. I don't even have a passport.”

‘It's time to change the system'

Meanwhile, Cundullah Fidan, 34, a freelance journalist, said he was pleased by the results. He didn't vote in the referendum, but supported the ‘Yes' camp because he felt Turkey's constitution, which had been installed under a 1982 dictatorship, needed to be revamped to fit modern times.

"It's time to change the system. The one we had was too old and was getting moldy,” Fidan said. "I don't know what Erdogan has in his future plans, but it will depend on the public. If they want change and economic development, then Erdogan can make it happen.”

When asked what he thought of the split vote, and how "No” voters could be represented in the new political landscape, Fidan said Erdogan would find a way.

"Erdogan is a reasonable man,” Fidan said. "He is a populist, which can sometimes be problematic, but he has his own style and has shown he can manage problems. We'll have to see what he does.”

At the same time, Fidan dismissed the notion that Turkey was a divided society.

Regardless of initial reactions, the validity of the voting process remains in question. Turkey's main opposition party said it might demand a recount of 60 percent of the votes. Additionally, Turkey's High Electoral Board (YSK) announced during the voting period that it would count ballots without stamps, which are usually used to guard against fraud.

Representatives with the minority rights-focused Peoples' Democratic Party (HDP) also made accusations of foul play during the voting period at a press conference in their Ankara headquarters.

"We have 65 pages of violations reported today,” said HDP Spokesperson Osman Baydemir. "Our observers were beaten, kicked out of voting areas.”

Early complaints on Sunday suggested a lower number of ballots were delivered to some polling areas than the number of people registered to vote at those locations. Power outages were also reported as polling stations in closed the southeastern city of Silvan, which was heavily damaged during military operations in 2015.

"We want an answer to this question,” said Baydemir at the press conference. "How many of the unstamped ballots were for ‘Yes' and how many were for ‘No'?” 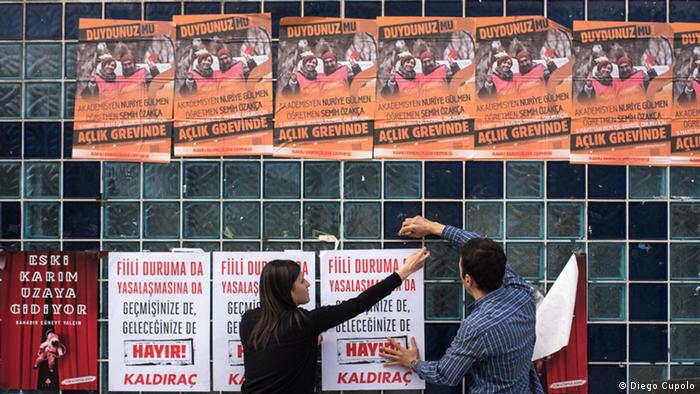 Betul Koca, a member of the leftist Anatolian Culture and Research Association, AKA-DER, hanging "No" posters in Ankara's city center ahead of the referendum

The referendum was also held under a state of emergency that has been ongoing in Turkey since the coup attempt in July 2016. Many opposition media outlets have been shuttered, about 140 journalists are currently jailed and 120,000 people were sacked or suspended from their jobs for suspected links to terrorist organizations. The political environment in the lead up the referendum was highly restrictive, and for this reason the results are invalid, said Betul Koca, a member of the leftist Anatolian Culture and Research Association, AKA-DER.

"A ‘Yes' vote has risen from the ballot box, but the ‘No' front will not be silenced,” Koca said. "The struggle has just started.”

Citing counter protests in the streets of some Turkish cities, Koca said the slim ‘Yes' victory did not hand Erdogan a mandate over the nation and he would face resistance. Still, like many other ‘No' voters, she did not envision a stable period for Turkey in the short-term.

"Wars will intensify inside and outside of [Turkey],” Koca said.  "A serious economic crisis will hit the country. These will increase discontent among the people … but the people and workers will prevail.”