Turkish President Recep Tayyip Erdogan has claimed victory in a referendum that will grant him broad new powers. The knife-edge result has left the country divided, with the opposition planning to challenge the results. 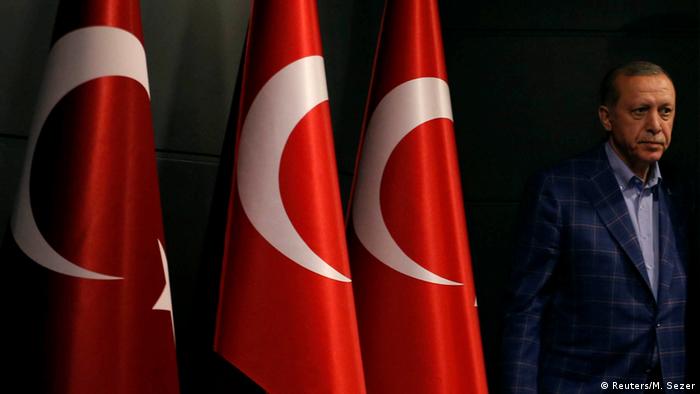 With unofficial results placing the "yes" camp narrowly ahead, Turkey's electoral commission declared a victory for the introduction of a presidential system late on Sunday - ushering in an overhaul of modern Turkish politics.

According to results from Turkey's state-run Anadolu news agency, the "yes" vote won by 51.4 percent compared to 48.6 percent for the "no" camp with 100 percent of the votes tallied. Final results will be released in 11 to 12 days, said electoral commission chief Sadi Guven.

The preliminary result is being strongly contested by the opposition Republican People's Party (CHP) and Peoples' Democratic Party (HDP) who vowed to challenge it. Much of their concern stemmed from the electoral commission's decision to allow ballots which had not been stamped with an official seal to still be counted as valid.

Guven, however, defended the decision and denied any of the ballots in question were fakes. He said the decision had been made so voters mistakenly given unstamped ballots wouldn't be "victimized."

A majority of Turkish voters living in Germany cast their ballots in favor of the constitutional reforms, with 63.1 percent voting "yes," reported Anadolu. In Austria, 73.5 percent supported the amendments. Turks living abroad could cast their ballots at diplomatic missions during a two-week voting period ahead of the referendum. 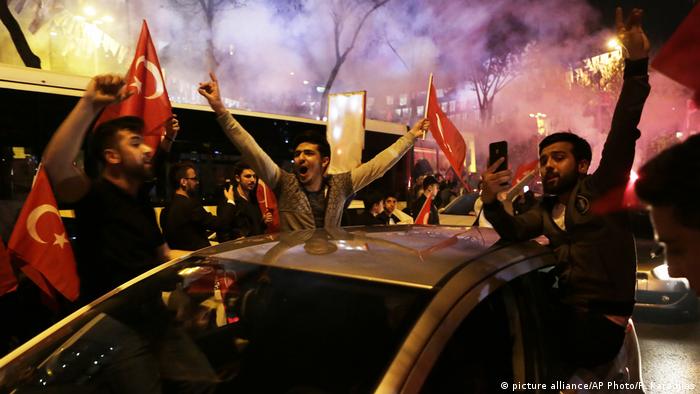 On Monday, German Chancellor Angela Merkel called on Erdogan to engage in a "respectful dialogue" with different factions in the Turkish society: "The (German) government expects that the Turkish government will now seek respectful dialogue with all political and social forces in the country, after this tough election campaign," Merkel said in a statement issued jointly with Foreign Minister Sigmar Gabriel.

Gabriel meanwhile also addressed the issue of Turkey's status as a candidate country for the European Union, saying that the question remained in Turkey's hand. However, he also said that joining now "would not be possible in any case," and that reintroducing the death penalty would be "equal to the end of the dream of [being part of] Europe." Turkish President Recep Tayyip Erdogan had said he would start talks on reintroducing the death penalty and hold another referendum on that topic should the opposition fail to support it.

Some other German parliamentarians meanwhile took a more hardline stance on Turkey's future prospects within the EU. Roderich Kiesewetter, the foreign policy spokesman of the CDU, Chancellor Angela Merkel's political party, said that Turkey's accession talks were practically "obsolete" at this point. Green Party spokesman on foreign affairs Omid Nouripour said that with the implementation of the constitutional changes tabled in the referendum, Turkey would cease to fulfill the "most basic criteria of EU accession, such as the separation of powers.

President Erdogan praised the Turkish people for making a "historic decision" by supporting the constitutional amendments that will see his powers as president expanded.

"The people have freely spoken their will. We will now work together to make the most important changes in the history of the constitution of our dear country," Erdogan said in a celebratory speech, citing unofficial results.

On Monday Erdogan was to chair a cabinet and security meeting that could extend the nine-month state of emergency brought in after the July 15 failed coup, Turkish media said.

Sunday's provisional results are still short of the decisive victory that Erdogan and his ruling Justice and Development Party (AKP) had campaigned for, but thousands of supporters still rallied to celebrate the results in Ankara and Istanbul.

"This is a decision made by the people. In our democracy's history, a new page has opened," Turkish Prime Minister Binali Yildirim told jubilant supporters from the balcony of the AKP headquarters in Ankara.

The office of prime minister is set to disappear under the constitutional amendments.

Supporters of the "no" camp protested the results in anti-Erdogan districts of Istanbul by bashing pots and pans with kitchen utensils. Hundreds of "no" supporters took to the streets in the areas of Besiktas and Kadikoy.

Despite initial results, critics and opposition parties have cried foul over the vote tallies after reporting irregularities at the polls.

The pro-Kurdish Peoples' Democratic Party (HDP) said it would challenge two-thirds of the votes, saying: "There is an indication of a 3-4 percentage point manipulation of the vote."

Similarly, the main opposition People's Republican Party (CHP) has said they could appeal up to 60 percent of the vote. CHP leader Kemal Kilicdaroglu said the party will not accept a "yes" camp victory.

"This referendum brought a truth to light - at least 50 percent of the people said 'no'," Kilicdaroglu said.

The referendum was carried out under a state of emergency that has seen around 47,000 people arrested in a crackdown following last July's failed military coup against Erdogan.

On Monday, many will be closely watching the initial assessment of the Organization for Security and Cooperation in Europe (OSCE), which had an observer mission in Turkey.

Shortly after the vote, Erdogan repeated his intention to reinstate capital punishment in Turkey. He said that if the opposition failed to support such a bill, he could hold another referendum on reinstating the death penalty.

Such a step would almost certainly spell the end of Turkey's bid for membership in the European Union.

Western countries reacted cautiously to the referendum results, with the EU urging the Turkish government to seek the broadest agreement after the "yes" camp's narrow victory.

"In view of the close referendum result and the far-reaching implications of the constitutional amendments, we also call on the Turkish authorities to seek the broadest possible national consensus in their implementation," the European Commission said in a statement.

German Foreign Minister Sigmar Gabriel says that people should remain calm regardless of the outcome of the vote, adding that "it's good that the bitter campaign, which also took place in Germany, is now over."

Relations between Europe and Turkey hit a new low during the referendum campaign after Germany and the Netherlands barred Turkish ministers from holding rallies in support of the constitutional amendments.

Erdogan called the moves "Nazi acts" and said Turkey could reconsider its ties with the EU after years of seeking membership.