Turkey hits back as IS fires mortars from Syria

Turkey has shelled rival militants jihadis and Kurdish militants across the border in Syria. This comes as the self-styled "Islamic State" in Syria fired mortars at Turkish towns. 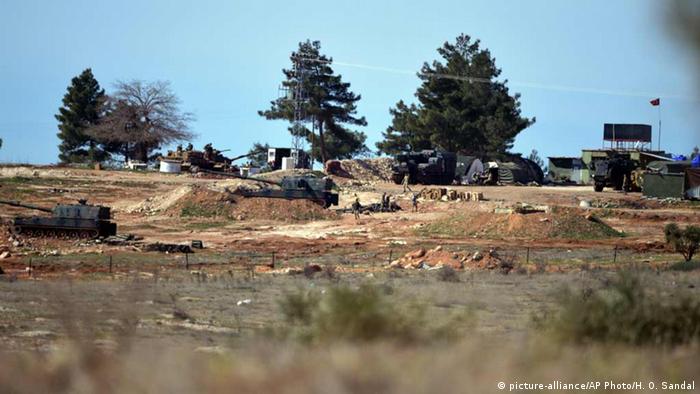 Former US Ambassador to Turkey James Jeffries spoke to DW ahead of Vice President Joe Biden’s visit to the country. He discussed Turkey's recent coup attempt, Fetullah Gulen and the US-Turkey relationship. (22.08.2016)

Turkey's president has slammed the US for its support of Kurdish forces fighting the 'Islamic State' (IS) in Syria. US troops were photographed wearing the insignia of a militia that Ankara considers a terrorist group. (28.05.2016)

Turkey continued to trade cross-border artillery fire with suspected "Islamic State" (IS) militants Tuesday as three shells hit the Turkish border town of Kilis, authorities said. The Turkish military said it immediately returned fire and there was no word on casualties.

Earlier, two mortar rounds landed in the garden outside a mosque in the southeastern Turkish town of Karkamis, also close to the border.

Both attacks are believed to come from the Syrian border town of Jarablus, held by IS.

The cross-border artillery attacks follow a suicide bombing at a wedding in the Turkish city of Gaziantep that killed 54 people, most of them ethnic Kurdish children.

That means Turkey is essentially fighting on two fronts in the increasingly complex Syrian conflict that's smoldering on its borders.

Gaziantep: From a dream to a nightmare

US Vice President set for thorny talks with Turkey

Even so, Ankara vowed Monday to push back IS from the Syrian borderland and crack down on the group's cells inside Turkey following the deadly wedding attack in Gaziantep.

"Our border has to be completely cleansed of Daesh," Turkish Foreign Minister Mevlut Cavusoglu told reporters Monday, using an Arabic term for the extremists. IS "martyred our ... citizens. It is natural for us to struggle against such an organization both inside and outside of Turkey."

The increasingly dangerous environment will welcome US Vice President Joe Biden when he arrives in Ankara on Wednesday with talks with Turkey's leadership. Ankara is pressing the US to extradite US-based Islamic cleric Fethullah Gulen whom it blames to last month's failed coup attempt.

Turkey is also upset with Washington's military support for Kurdish militia fighters in Syria which it considers an extension of the Kurdish insurgency it's been battling since the early 1980s.