Following the bombing of a Kurdish wedding, Turkey's foreign ministry has said it's willing to "do what it takes" to rid its borders of the "Islamic State" (IS). The militant group is the main suspect in investigations. 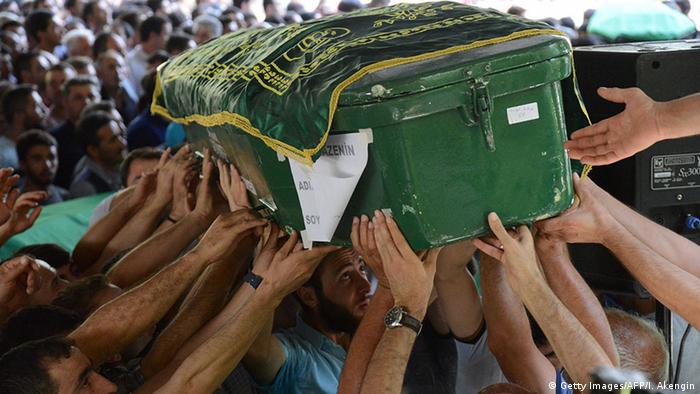 At least 100 children have been killed in airstrikes and combat in Aleppo in August, a monitor reports. On Saturday the older brother of 5-year-old Omran, whose image shocked the world last week, became one of them. (20.08.2016)

Hundreds of protestors have called for justice after a transgender woman was brutally murdered in Istanbul. Turkey ranks number one in Europe in transgender murders. (21.08.2016)

The attack in the city of Gaziantep on Saturday was the deadliest in Turkey this year. President Tayyip Erdogan confirmed on Sunday that the suicide bomber was aged between 12 and 14. The blast went off at an outdoor Kurdish wedding party, killing 54 people, including 22 children. Dozens of others were injured.

No one has yet claimed responsibility for the attack. Erdogan said Sunday, however, that initial evidence pointed towards IS. It was evident the group "had such an organization in Gaziantep or was attempting to make room for itself in recent times," he said.

According to a senior security official, the device used in Saturday's attack was the same type as those used in a suicide attack in Suruc in July last year, and again in October in Ankara. Both attacks were blamed on IS.

Turkey has been hit by a string of attacks in the past year. The country faces security threats from IS in neighboring Syria, as well as from local Kurdish fighters linked to the outlawed Kurdistan Workers' Party (PKK).

In June, suspected IS militants attacked Istanbul's main airport, killing 44 people. The group was also accused of carrying suicide bombings at a rally of labor activists in the capital, Ankara, last October that left more than 100 people dead.

Around a dozen people were killed this week in a string of bombings blamed on the PKK, and targeting police and soldiers. Clashes between the militants and government forces have flared after a fragile two-and-a-half year peace process collapsed last year.

'Completely cleanse' borders of IS

In light of Saturday's bombing, Turkey vowed on Monday to "completely cleanse" IS militants from its border region.

"Daesh should be completely cleansed from our borders, and we are ready to do what it takes for that," Foreign Minister Mevlut Cavusoglu said at a news conference in Ankara, using an Arabic name for the group.

A senior rebel official also said Turkish-backed Syrian rebels were preparing to launch an attack to seize the Syrian town of Jarablus from IS on the border with Turkey, a move that would deny control to advancing Syrian Kurdish fighters.

The rebels, which include groups fighting under the banner of the Free Syrian Army, were expected to launch the assault on Jarablus from inside Turkey in the next few days.

Gaziantep: From a dream to a nightmare